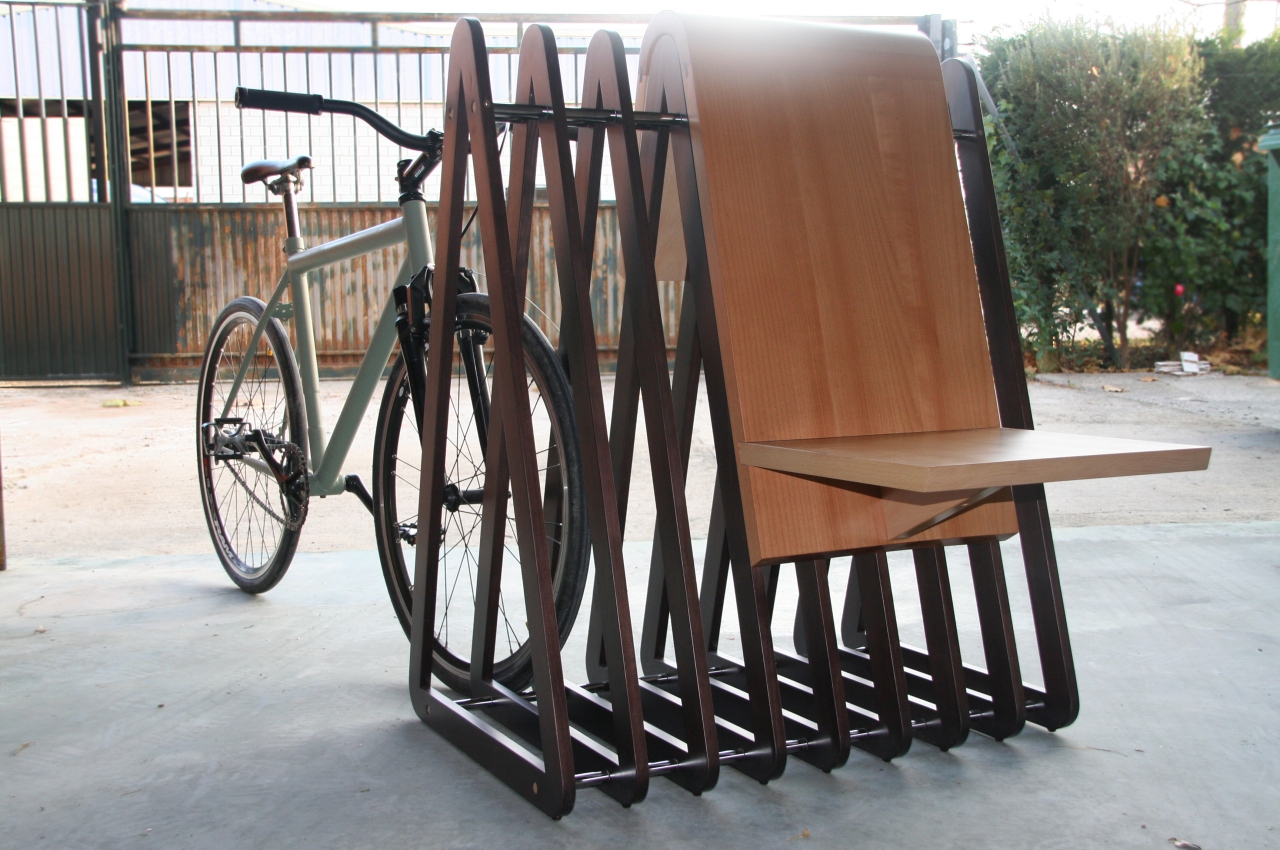 There is no shortage of ideas on how to give everyone a seat, especially outdoors. Of course, space for benches and chairs will always be a problem, whether it’s at a park or some vacant area in the middle of towering buildings. That’s not even considering yet those “in-between” places where people come and go a lot, only stopping by for a brief breather. Such resting places for cyclists, for example, are far and few in between, and they aren’t exactly designed for this segment of the world’s active population. That’s the very specific need that this bench concept is trying to address, giving cyclists a place to rest while still offering the option to accommodate a bunch of people at the same time. 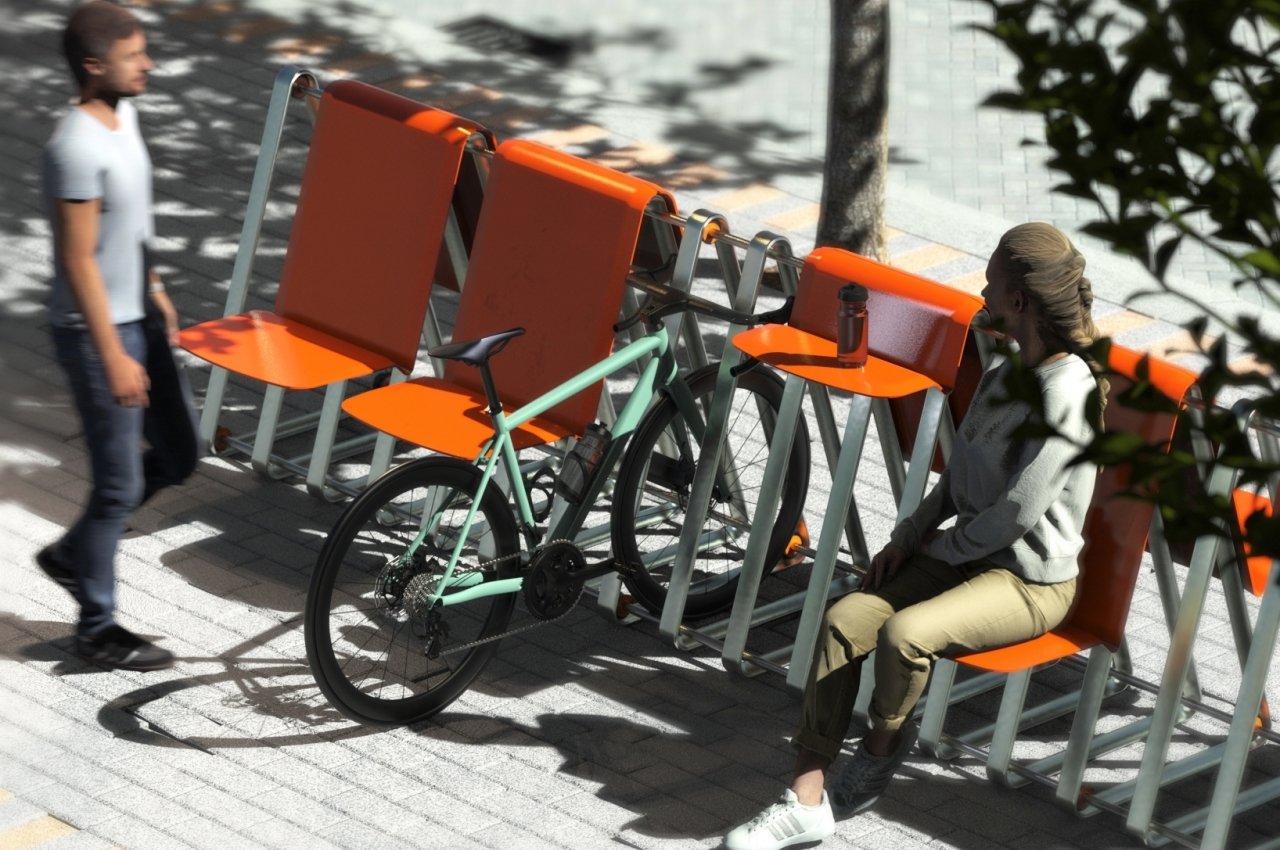 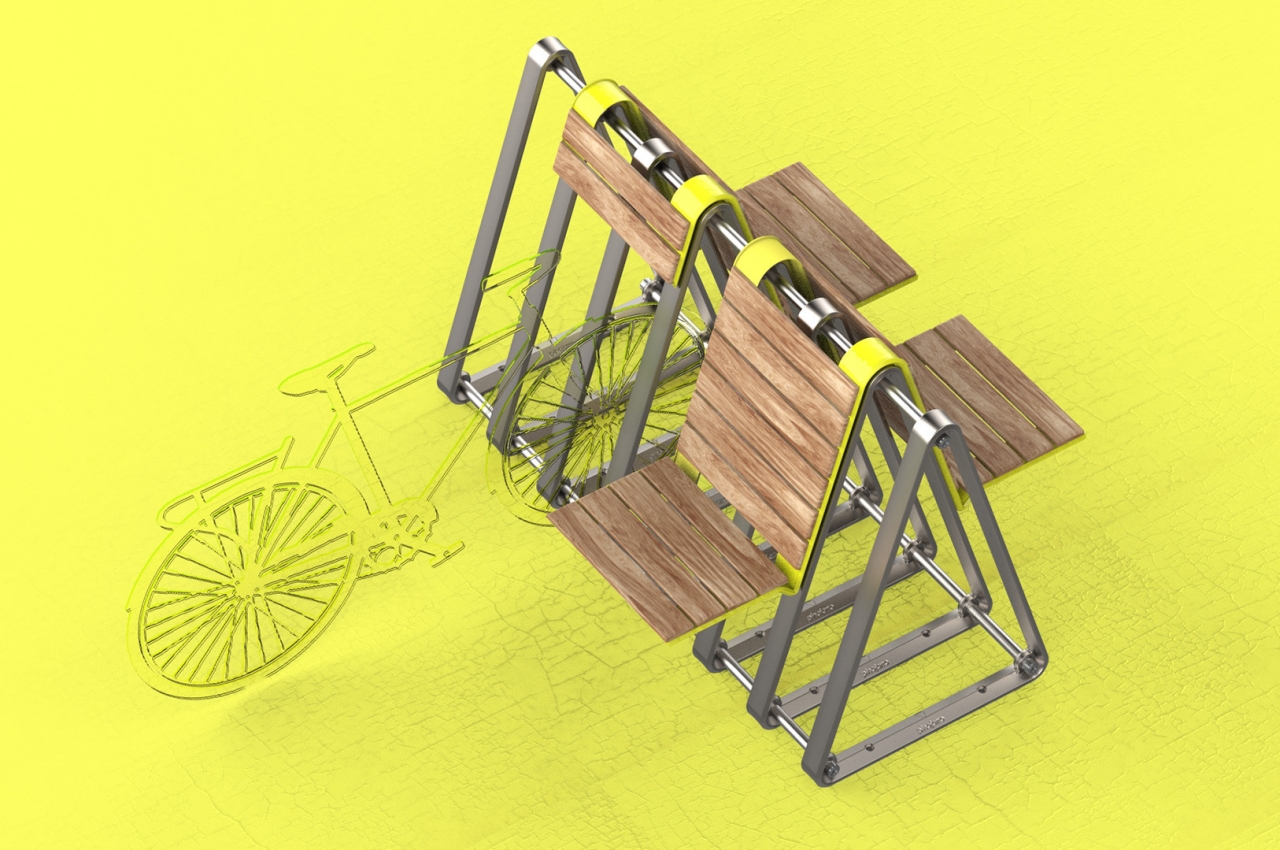 Of course, there are public and outdoor spaces that cater to those who regularly take their bikes out, either for work, leisure, or exercise. In most cases, however, there is a single parking space for these bikes that are often a good distance away from where they might want to sit down and chill. Sure, that does force them to work their legs a bit more, but it might introduce inconveniences as well as concerns over the security of their metal steeds. 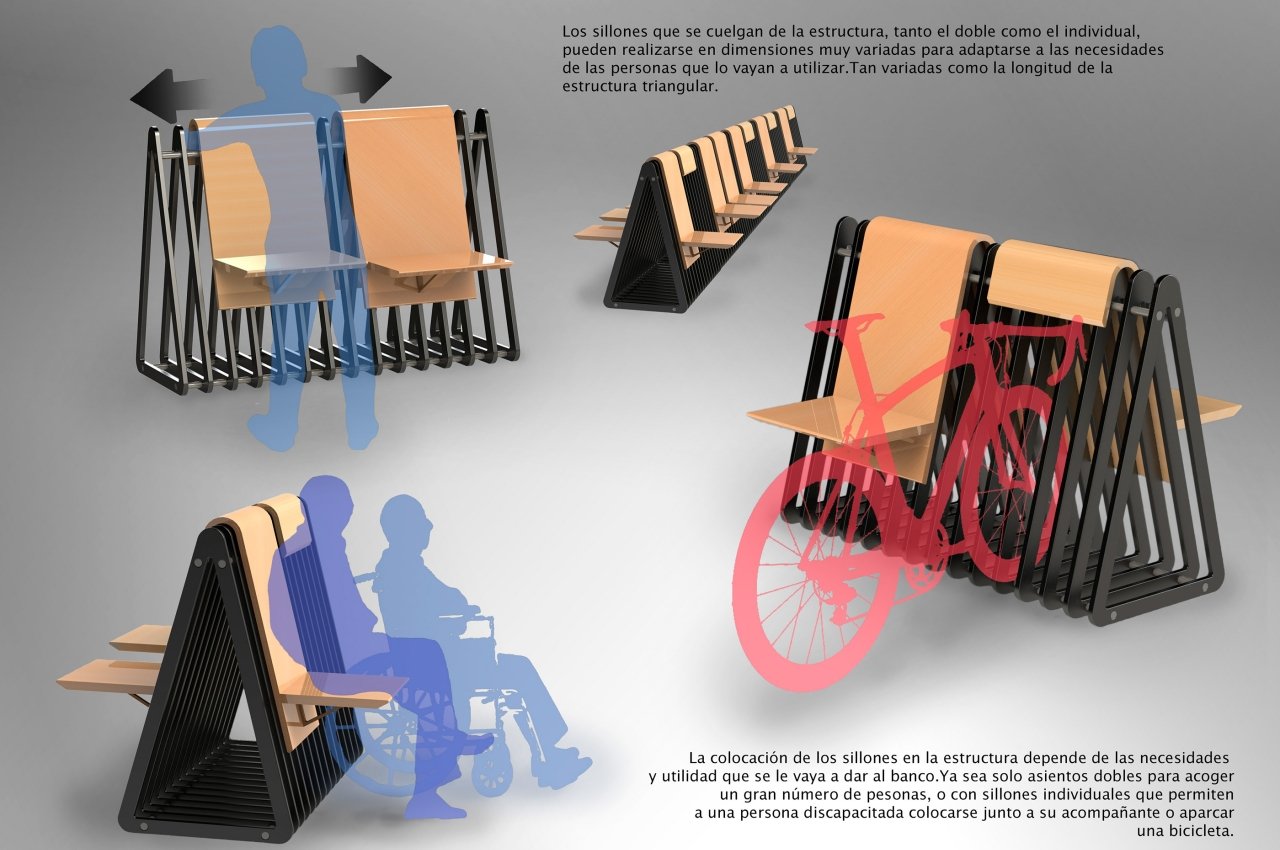 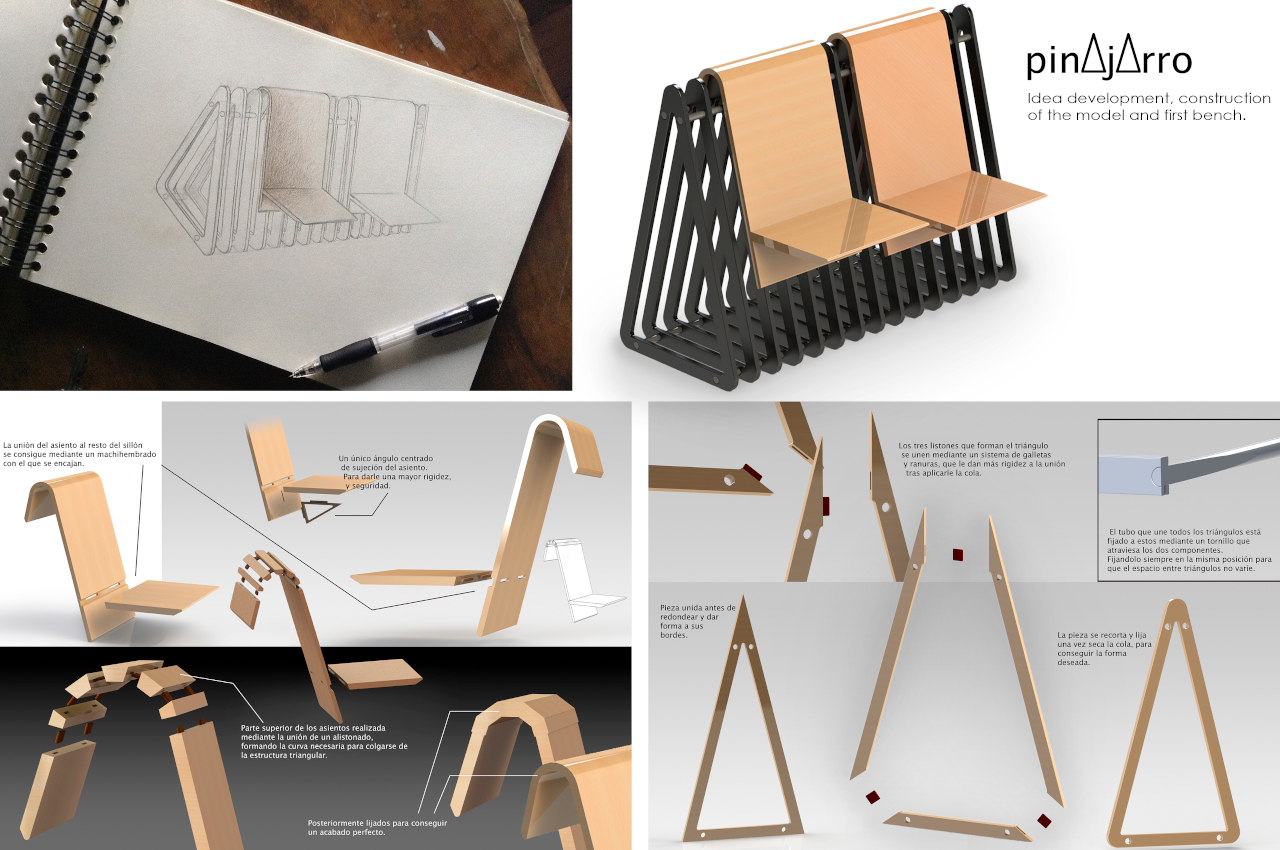 The Pinajarro Bench is designed to address those concerns by allowing bikers to park where they sit or vice versa. In a nutshell, the slots between the metal bars of this triangular structure might be very familiar to cyclists as a place to rest their wheels and chain their bikes down. At the same time, however, the bench can accommodate wooden or metal seats that hang over the top of that triangle, allowing the same bench to be both a parking slot and chair for cyclists at the same time, letting them catch their breath while keeping an eye on their bike. 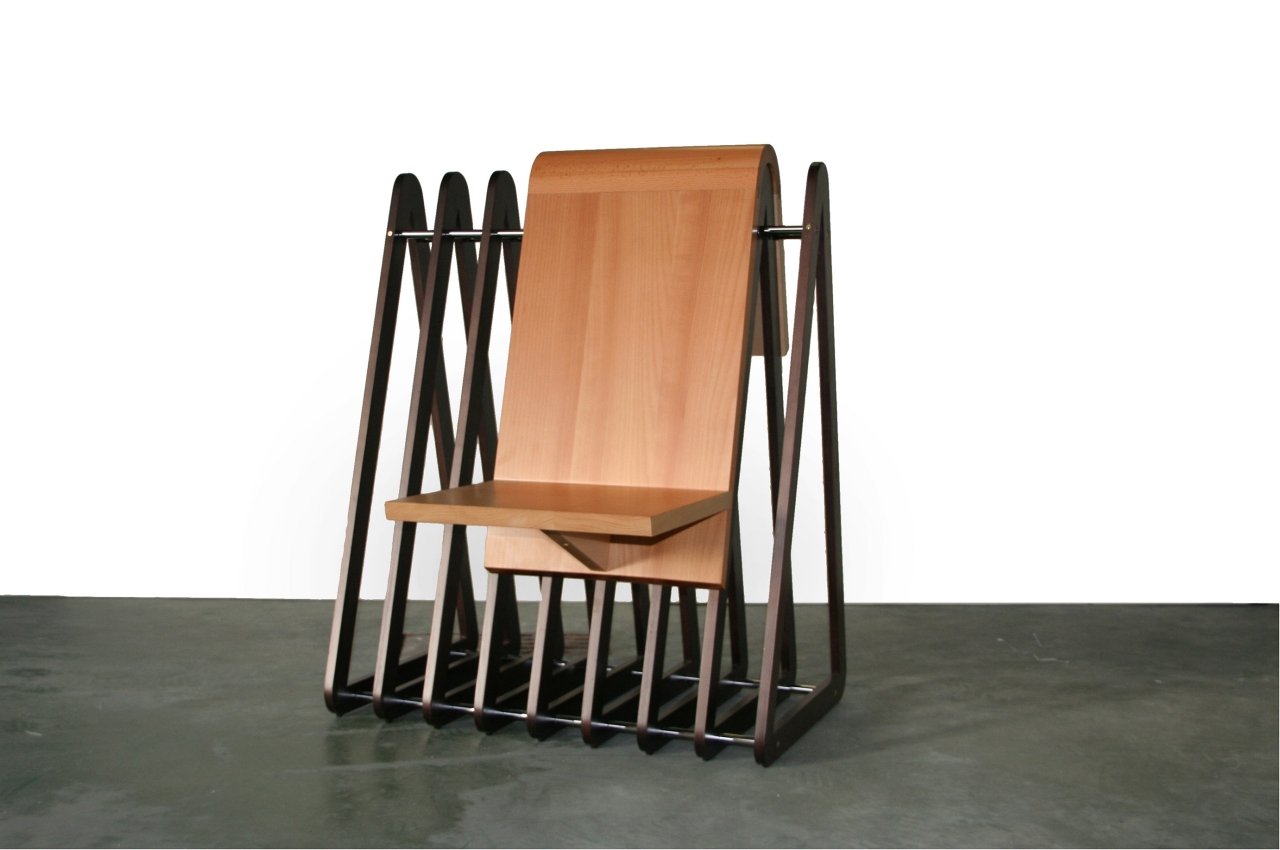 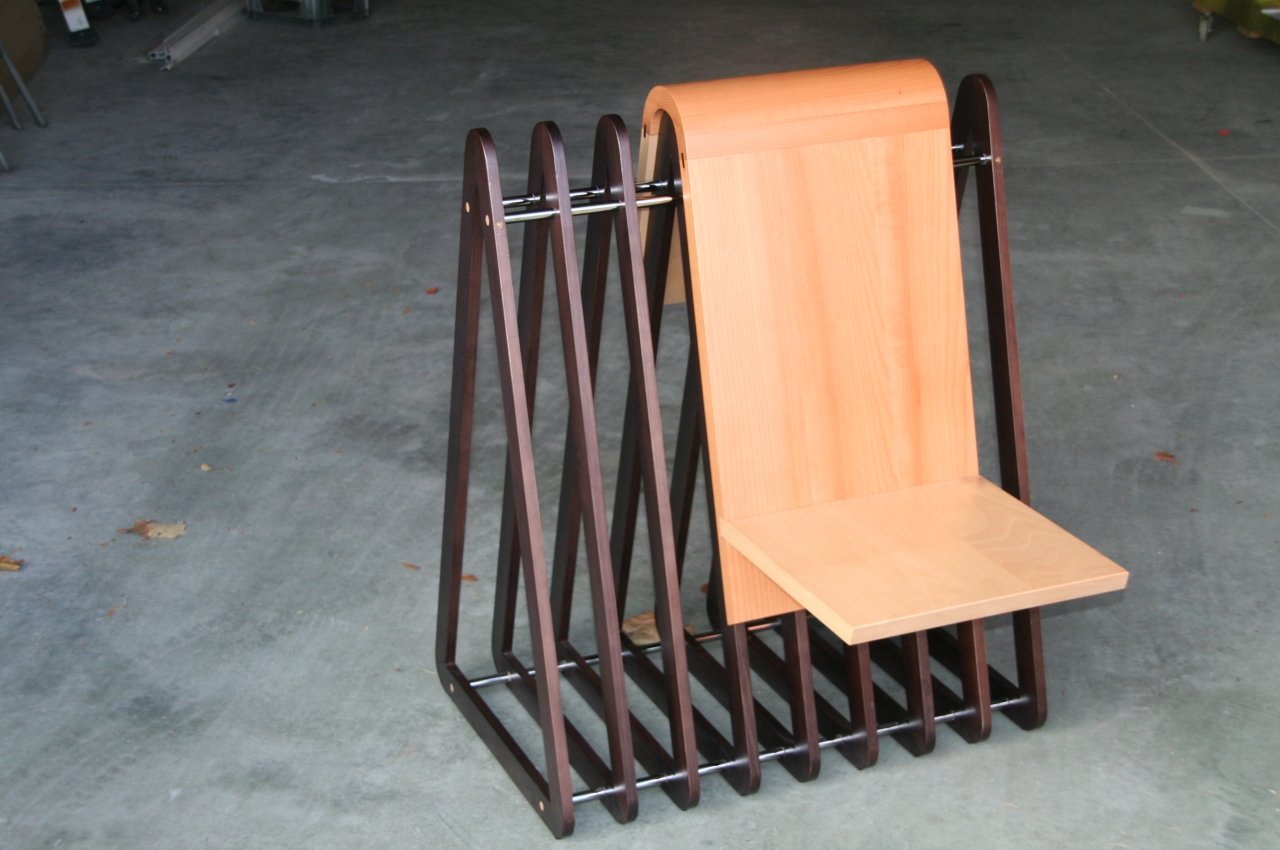 The concept, however, goes beyond a single configuration. For example, the entire bench can be occupied by seats only, preventing anyone from parking their bikes. Conversely, it can have no seats at all and functions purely as a parking space. The orientation of the seats can very, letting people sit beside each other or back to back. Even the seats themselves can have variations in design. In one scenario, the back of the seat can have a flat flap that serves as a tray for drinks or other items for people sitting on that side. 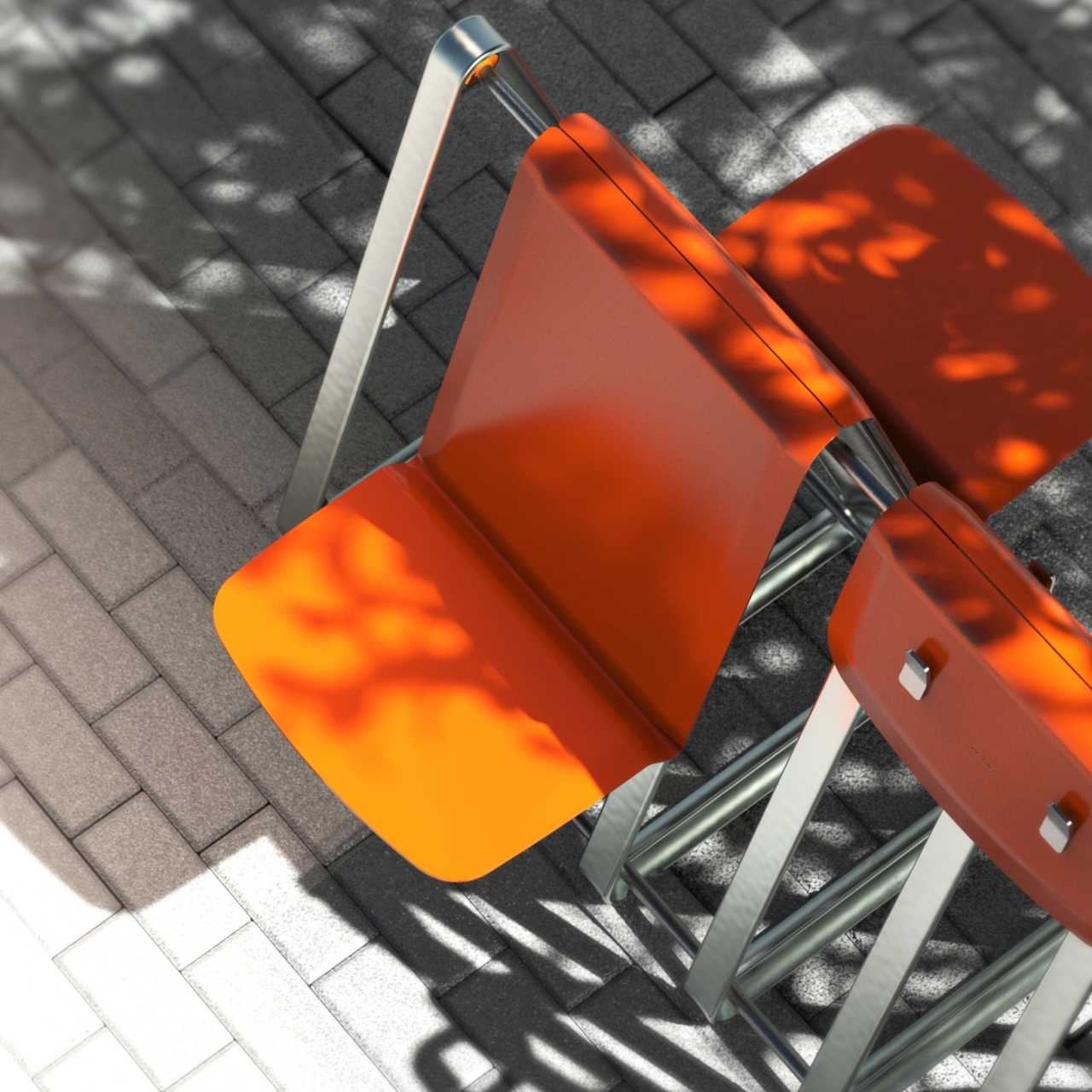 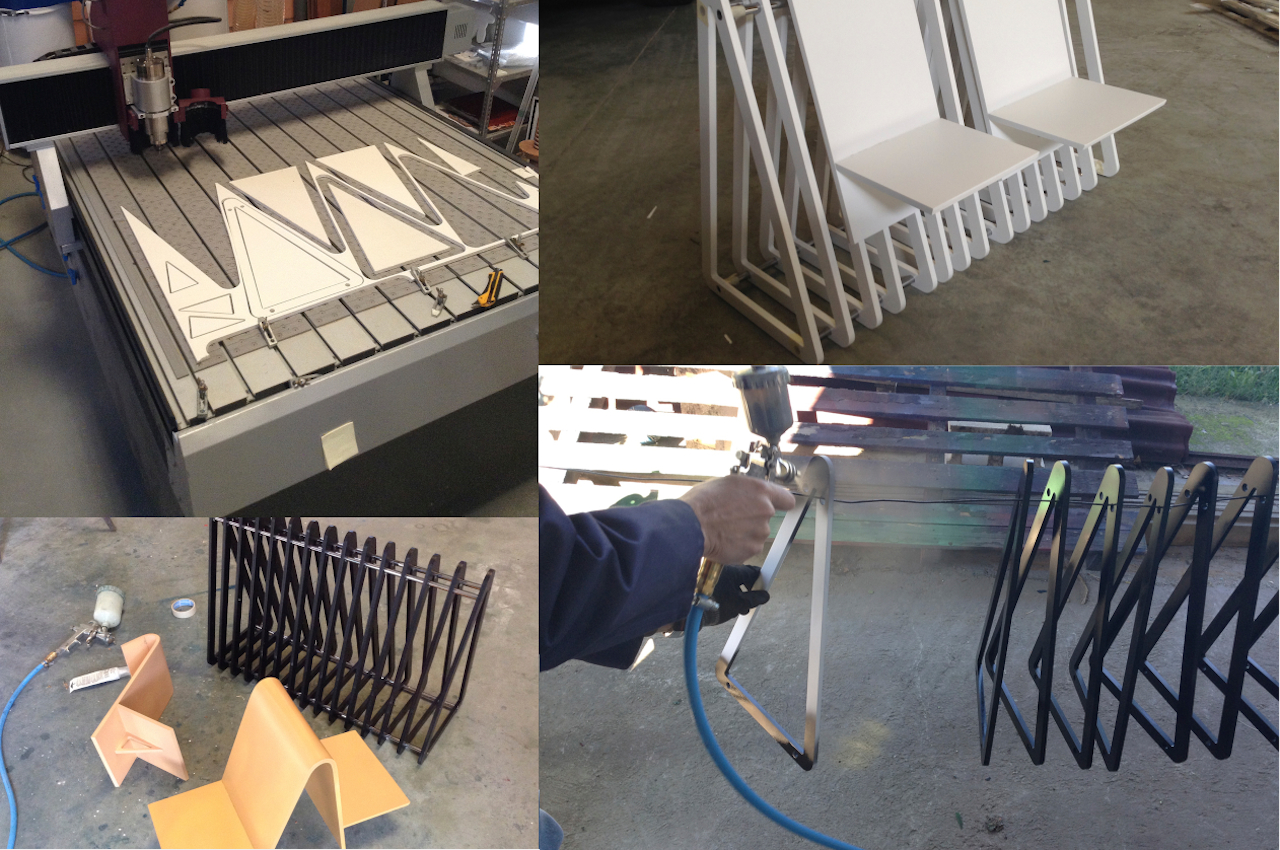 The Pinajarro Bench can be made from a wide variety of materials, but the concept has a particular bias for sustainable options. The base itself will always be made from hard steel to give the structure balance and strength, but the seats can be made from wood or metal. The latter might be a better choice for benches that will be exposed to the elements 24/7. Regardless of the materials, the concept offers a sustainable and rather ingenious way to give bikers their own special space while still keeping the doors open for other seating configurations. It might even inspire other people to embrace a healthier lifestyle, knowing that there is a safe and comfortable place for them to rest when they need to. 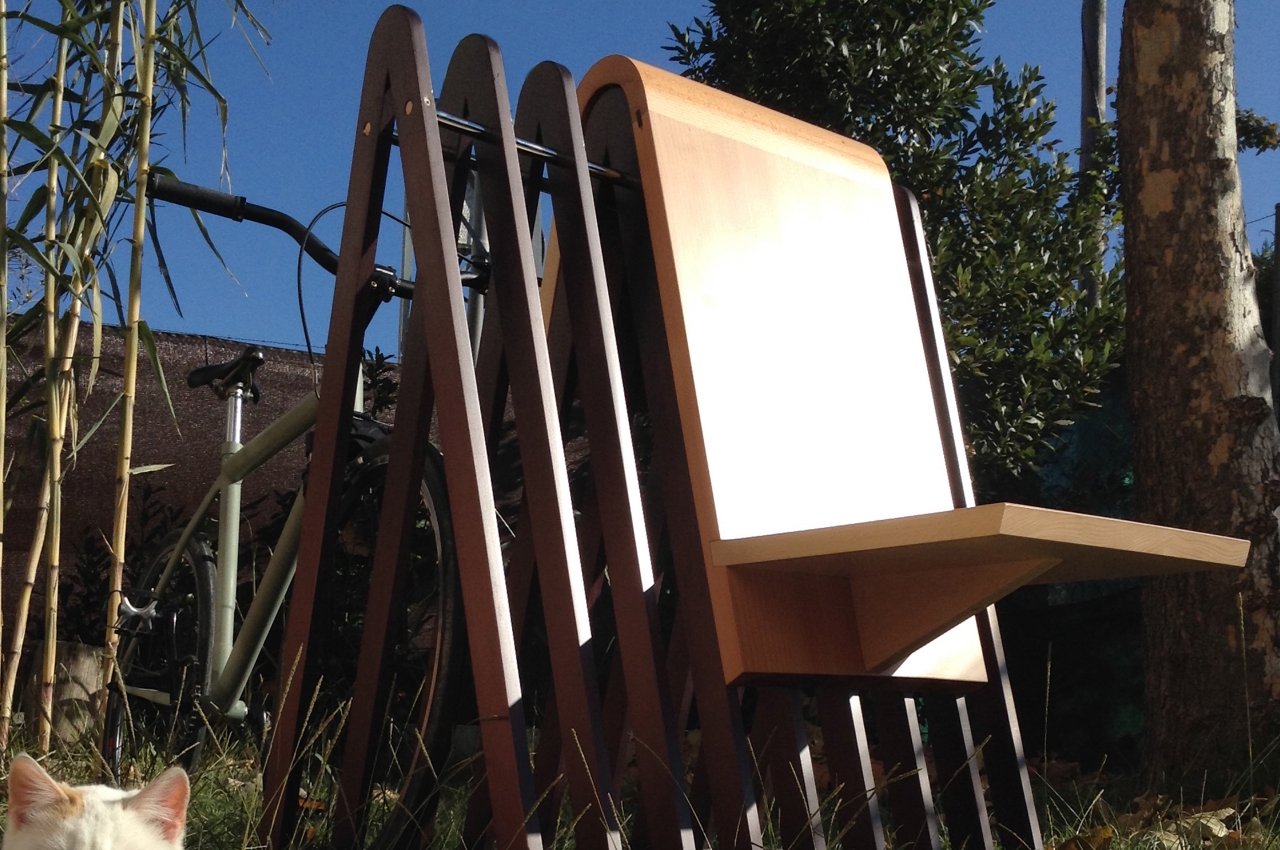 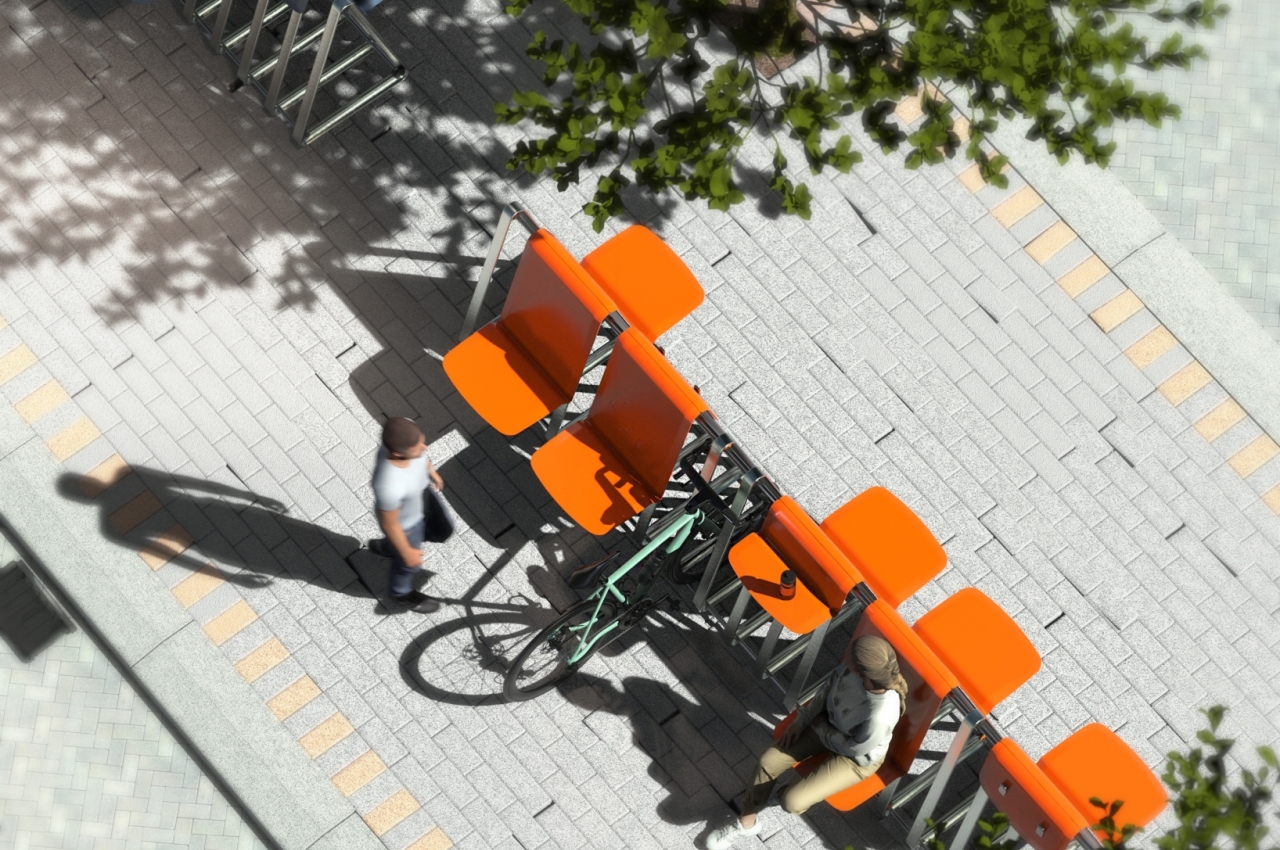 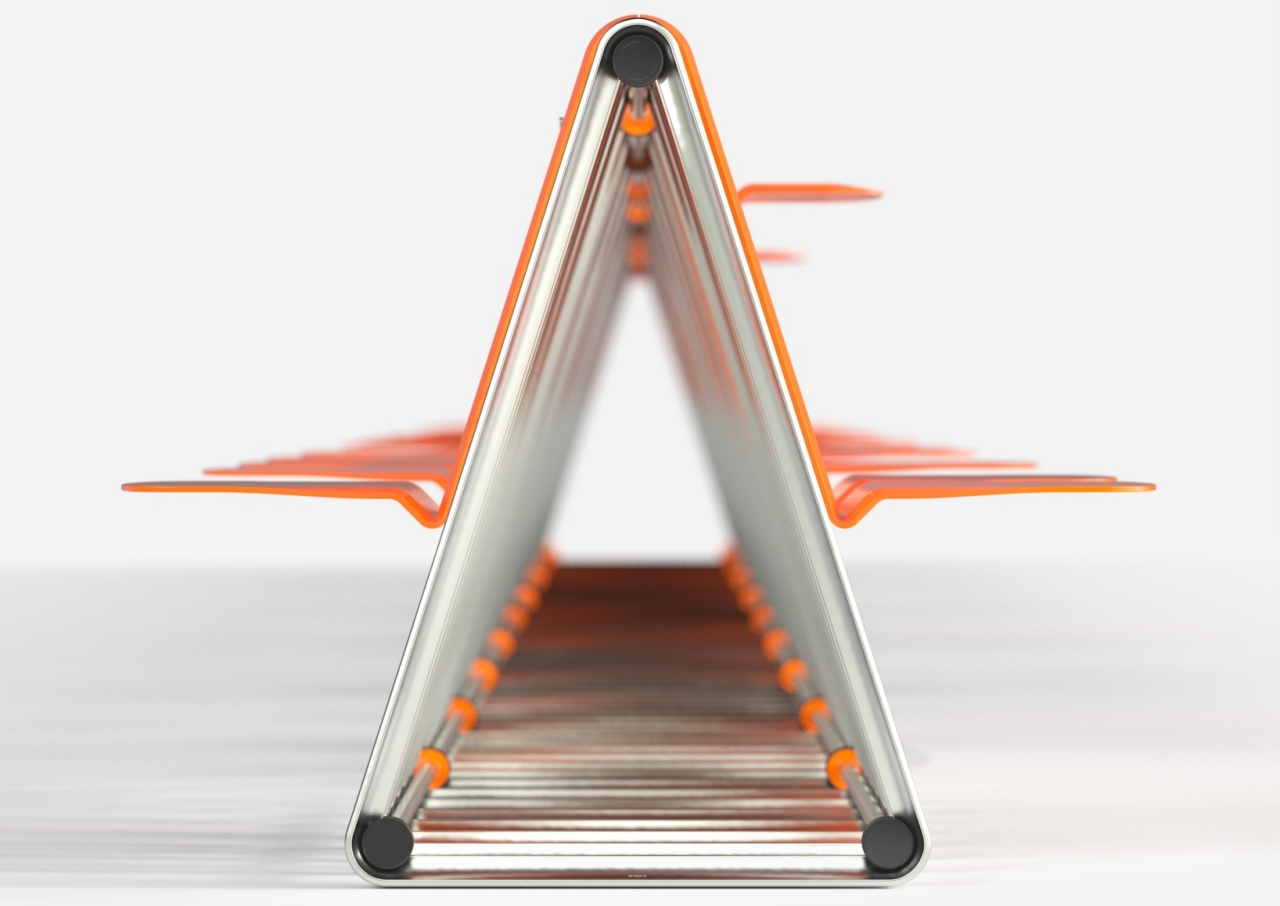 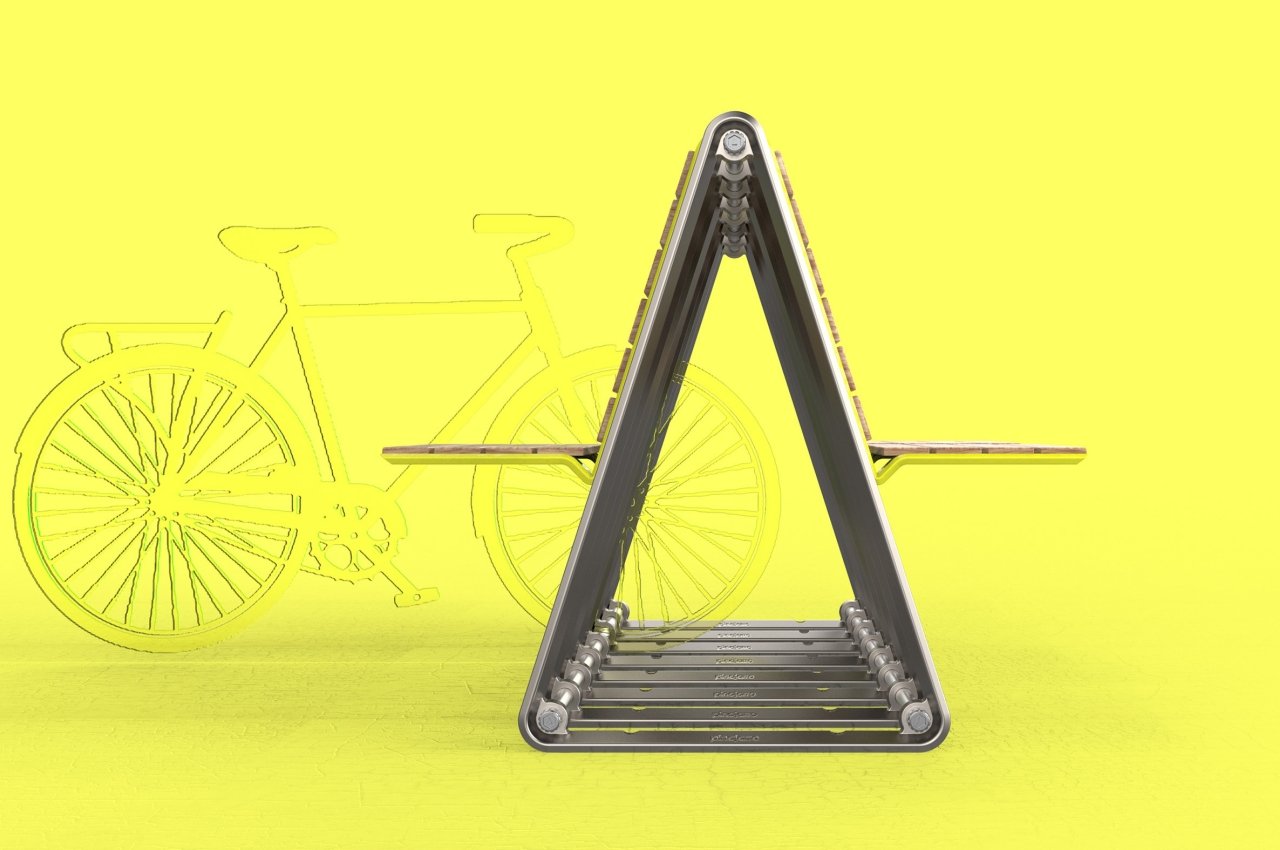 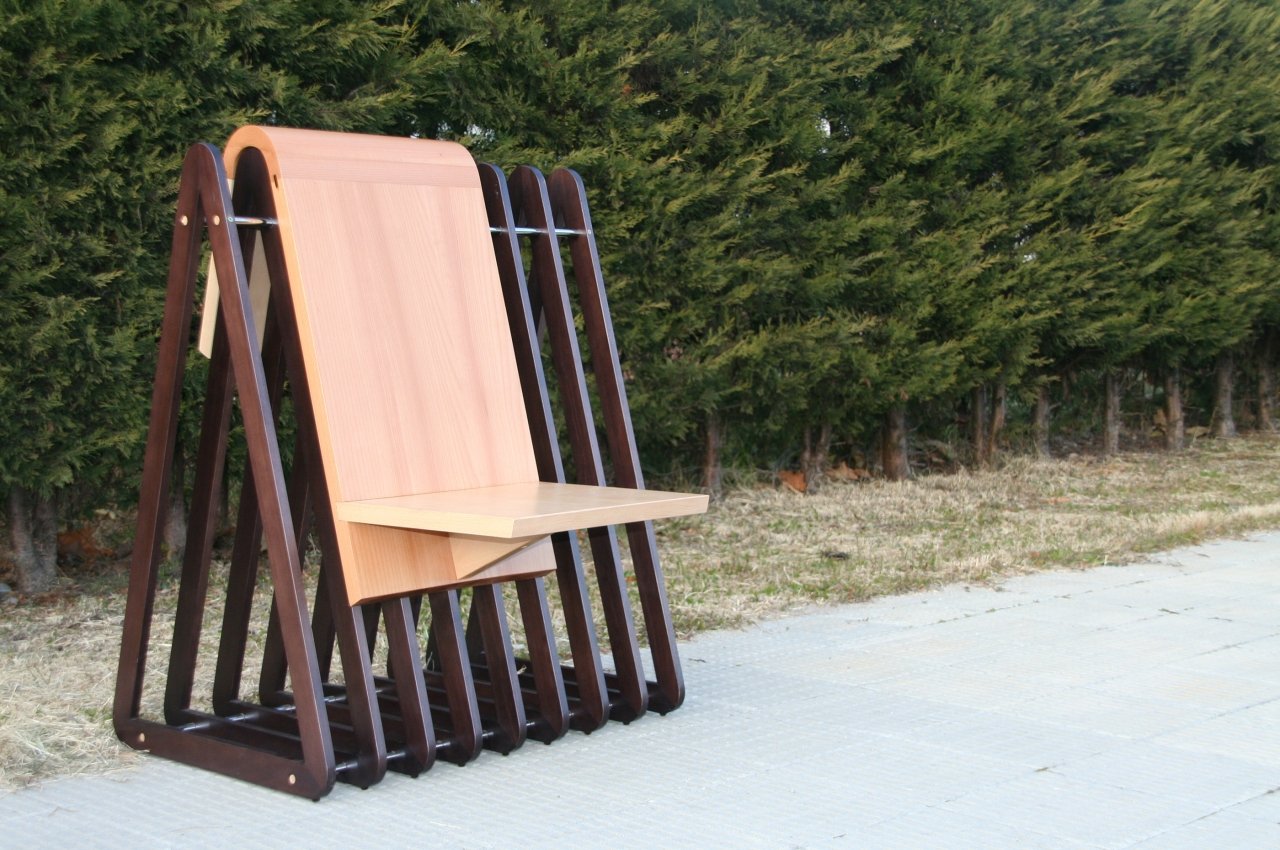 The post This modular bench concept gives bikers a place to park and sit first appeared on Yanko Design. 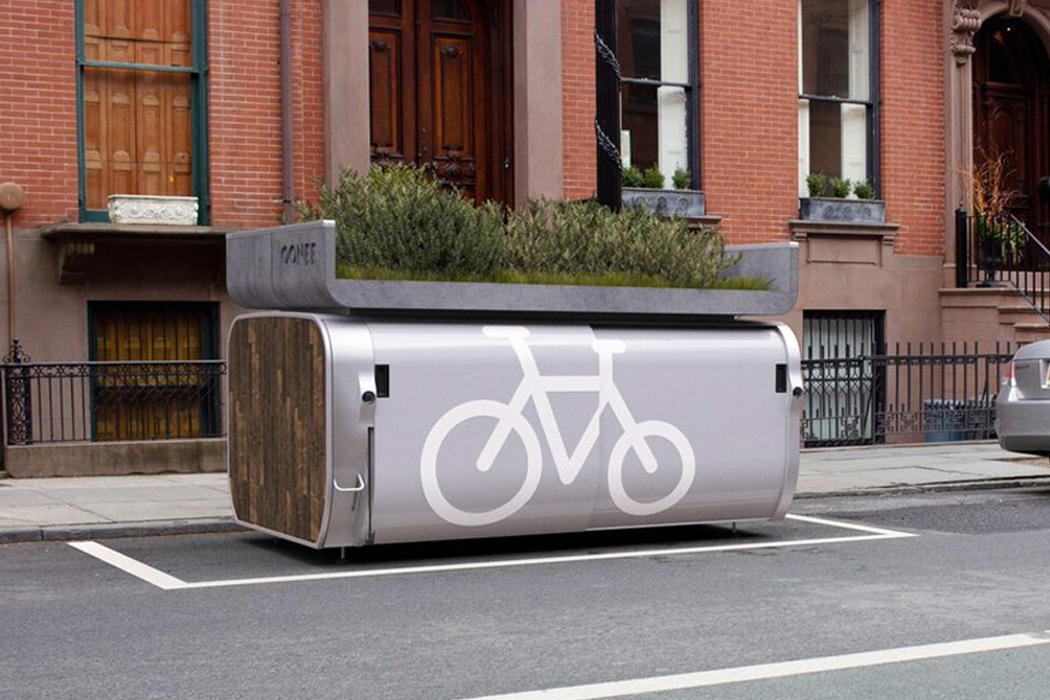 The number of four-wheelers in New York City is increasing, and so are the bicycles. While the former have thousands of options in and around the city to park, the latter options are limited. People in New York want to make the shift (and are already doing that) to using bicycles, but the lack of parking spaces compared to cars is a bit of a headache. According to Oonee Founder Shabazz Stuart, if only 5 percent of these curbside parking spots designated for car parking are used for bike parking, the seismic shift in the sustainable transport mode will be significant.

Hence came into existence the Onnee Minibike pod driven by the need to have a safe parking spot for bicycles. Measuring the size of an average sedan, Mini promises 10 high-quality secure bike parking spaces to get rid of any parking woes and bike theft. That means for every one car parking space used for the Mini pod, ten bicycles are sorted for hassle-free parking. On the inside, there is an air pump and the ambiance of the space is also top-notch. On the top, there is a planter box, ideal for keeping in tune with nature and create a welcoming environment for cyclists who are looking to store their bikes safely when need be. Access to the bike pod will be via the smartphone app or the keycard – eliminating any chances of bike theft that has been on the rise ever since the pandemic. Oonee is going all out with its strategy to change the urban streetscapes of New York City and other parts of the globe with lucrative insurance coverage for the bikes.

Aesthetics and matching the architecture of the location where the pod will be installed is essential, so Oonee Mini pod comes with customizable accent cladding and colors for a mix of unique settings and streetscapes. Combine that with accent lighting for warm lighting and scratch-resistant powder coat paint to protect the elements. To make the pod visible even during the darkest hours of the day, a glossy finish is applied to the pod. Things are getting exciting courtesy of the VOI sponsorship, Oonee Mini will bring two pods to the streets of New York this Spring.

Stuart’s vision coincides with that long-term micromobility, as he rightly put it in words, “People can spend billions and billions of dollars on bikes and bike share, but until we get serious about infrastructure, we’re just a community of people who ride bikes for fun. We need to start thinking about bikes and scooters and micromobility as transit, as a legitimate piece of transportation.” 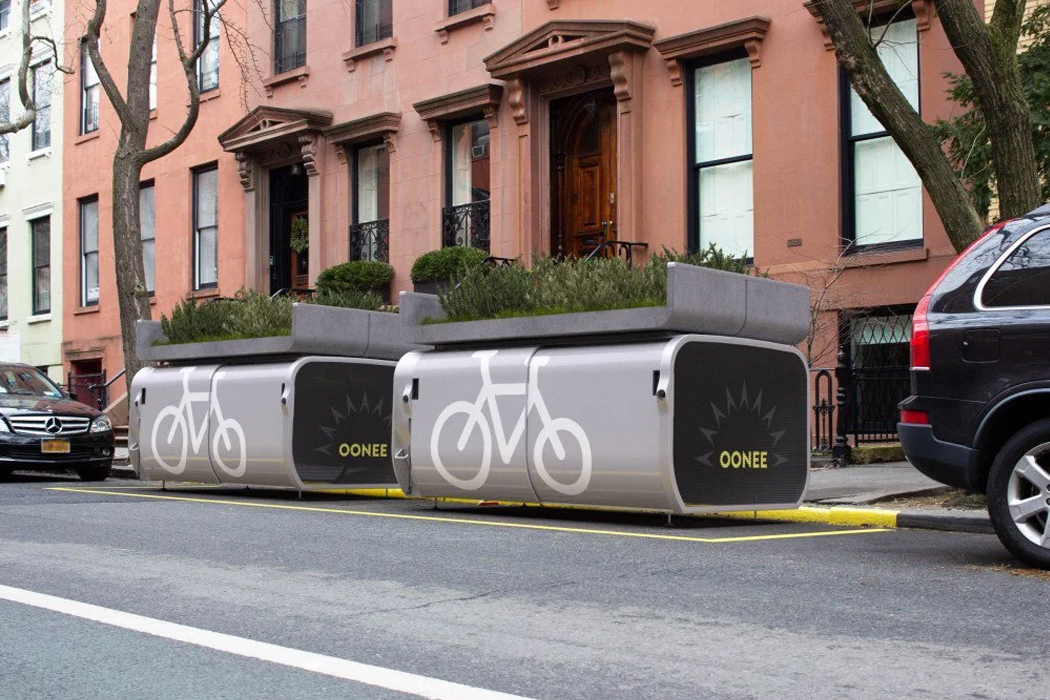 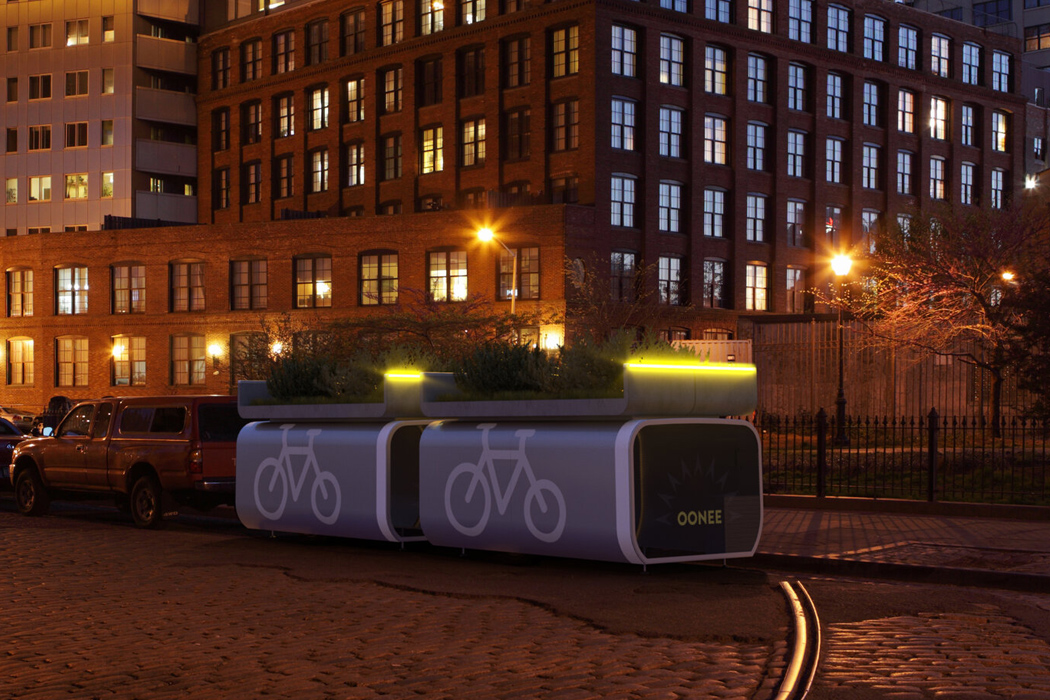 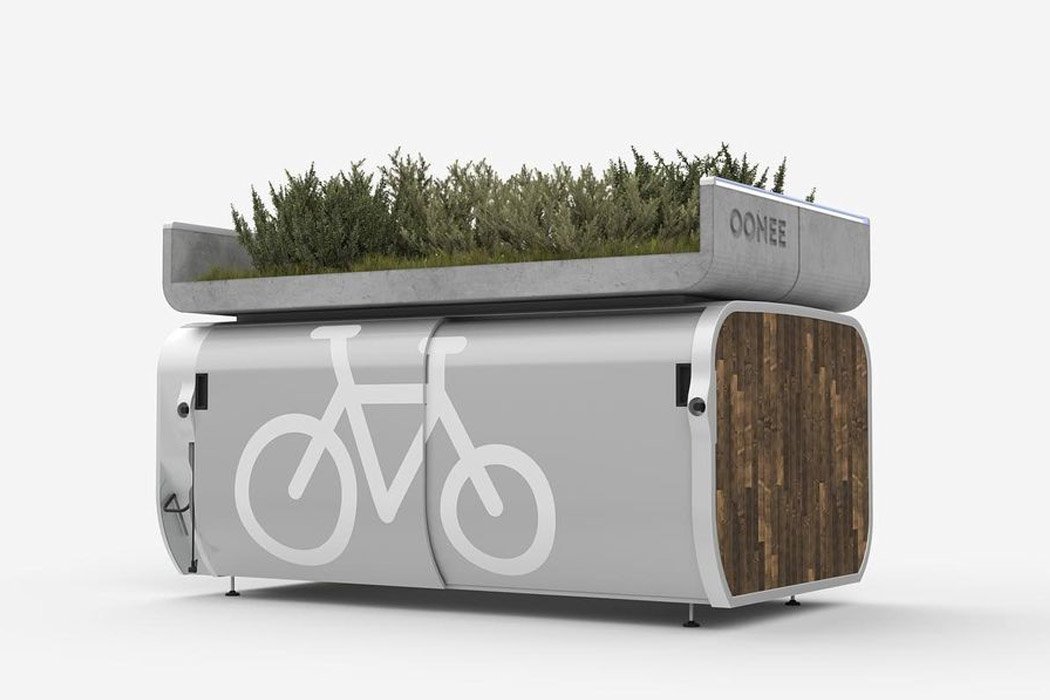 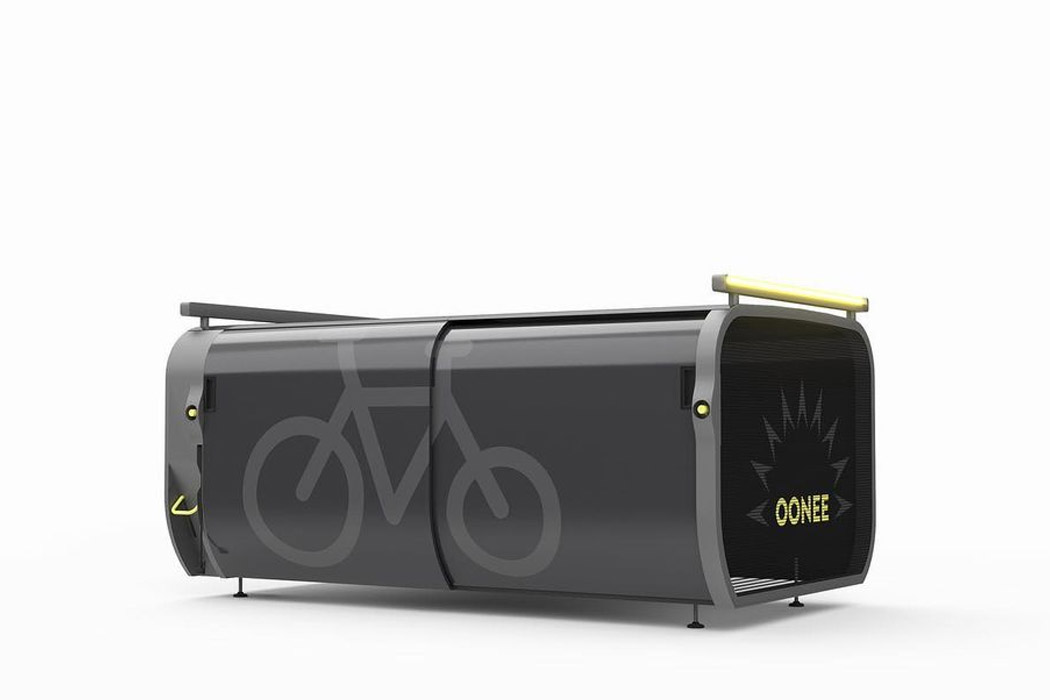 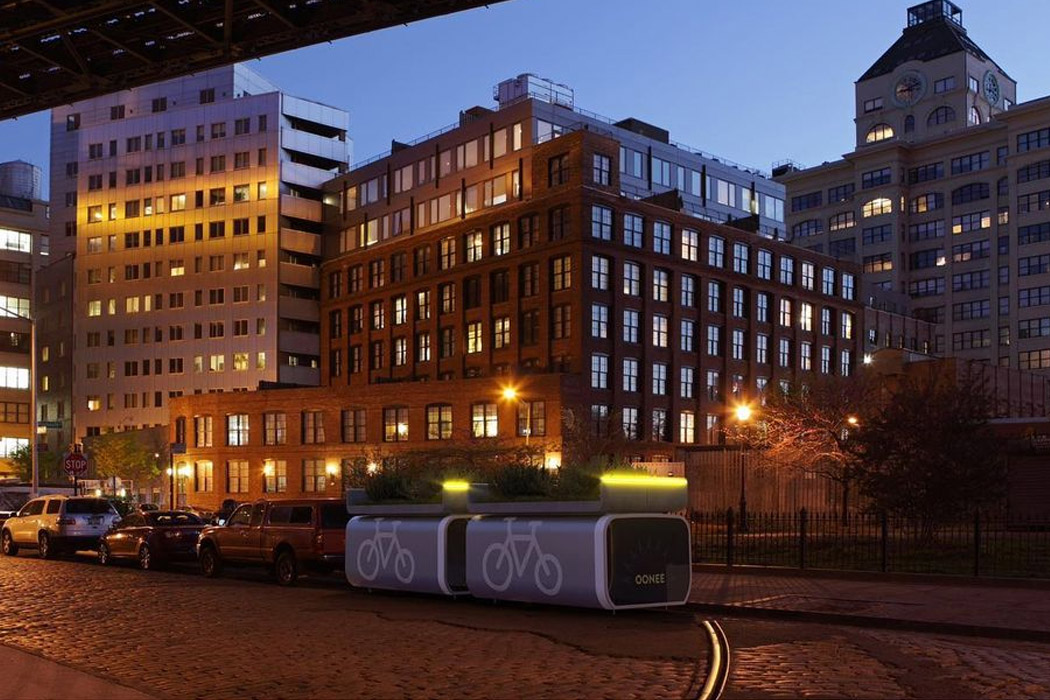