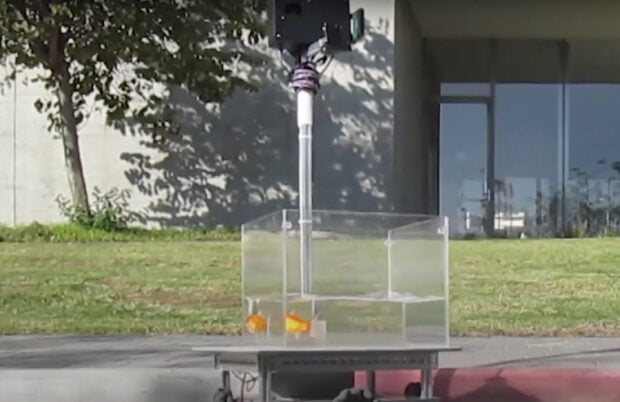 In long-awaited news, Israeli researchers at Ben-Gurion University have successfully taught goldfish how to steer a vehicle in order to reach a target and receive a treat, using a specially designed FOV (fish-operated vehicle). The future, ladies, and gentlemen – we’re finally here. 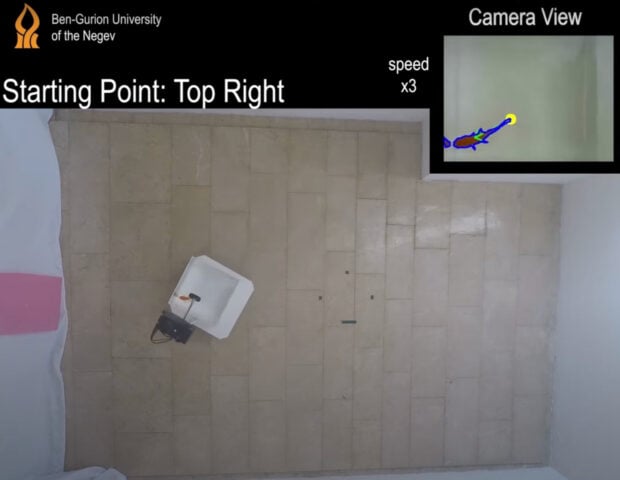 The FOV is outfitted with a LiDAR (light detection and ranging) system that uses lasers to determine the fish’s location inside the tank, and the vehicle’s location on land, with the vehicle moving in the direction in which the fish swims. The researchers say that after just a few days of training, fish were able to consistently navigate the vehicle to the target, regardless of starting point and obstacles such as walls, or the presence of false targets. You know, maybe we haven’t been giving goldfish the intellectual credit they deserve.

Obviously, the goldfish’s real target is the nearest pond, and there’s no doubt in my mind once it finally gets its driver’s license that’s exactly where it’ll be headed. If only it’d been riding shotgun the time I accidentally drove into that pond I could have saved it the trouble of taking an in-car driving test!

I’m fully aware of how bad my pun game is right now, but Thilina Liyanage’s Beach bar looks absolutely ‘fin’credible! Designed to resemble a scaled-up model of a goldfish, the Beach Bar looks stunning from every angle. The fish’s hollow body serves as the bar + counter area, while the space right beneath the tail provides ample seating. Made with an underlying bamboo structure, the Beach Bar comes with a fish-scale-inspired golden fabric clad that gives the bar its fishy appearance from the outside, while providing partial shade on the inside during the day. Once the sun sets, though, the lamps on the inside help give the fish a distinct diffused warm glow, making it look like the goldfish is glowing – a sight that’s even more fascinating when viewed from the top!

The Beach Bar has a staircase entrance near the tail area, with multi-level seating, and a balcony located right at the mouth, giving you a stellar view of the ocean. Liyanage’s Beach Bar, sadly, exists just as a concept… although the designer has made his 3D model available for free to download… so you could potentially pop on your VR headset, make yourself a cocktail, and indulge in a virtual walkthrough! 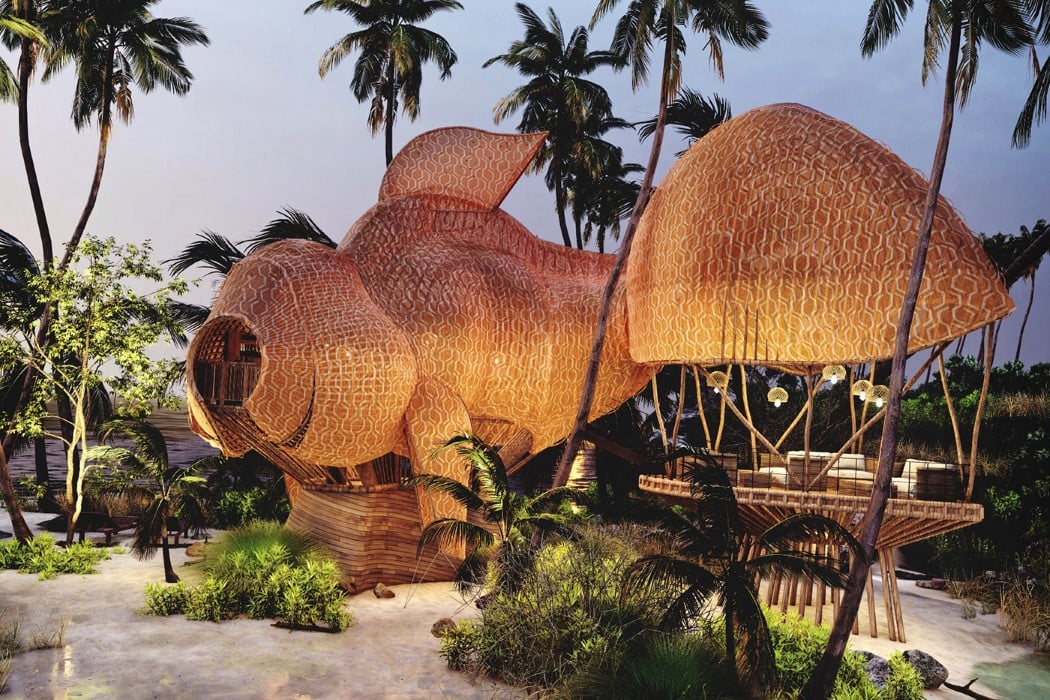 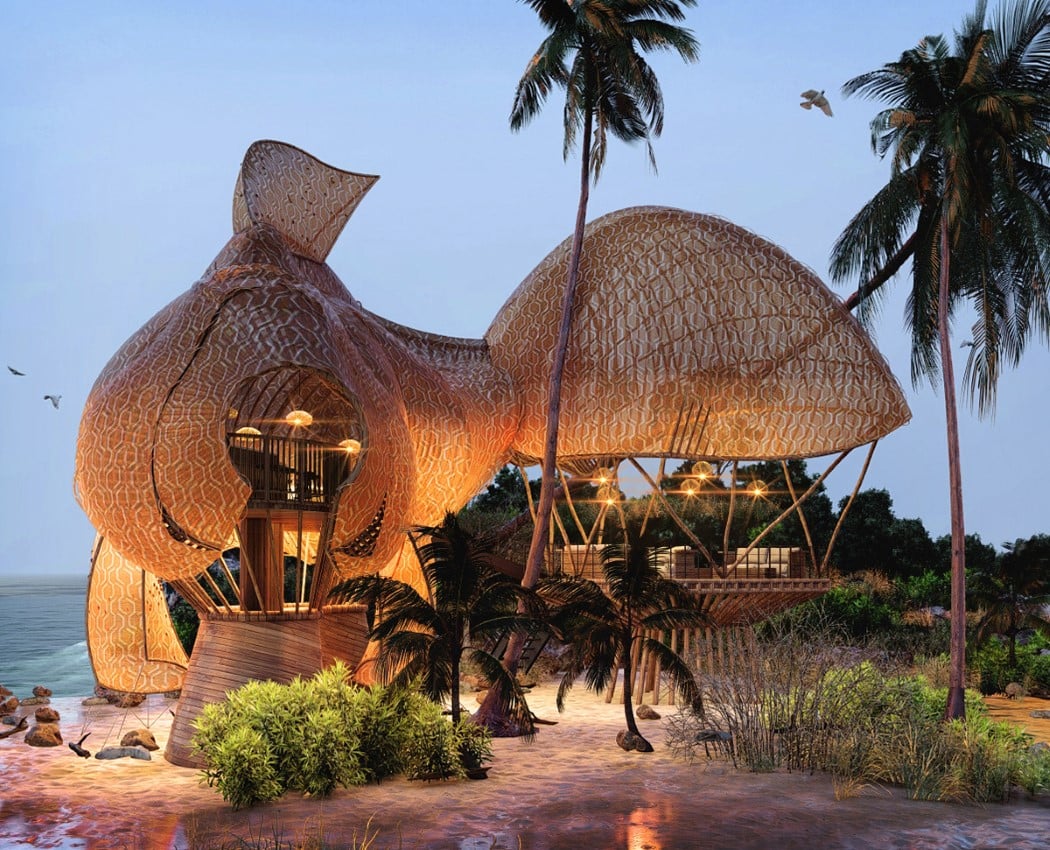 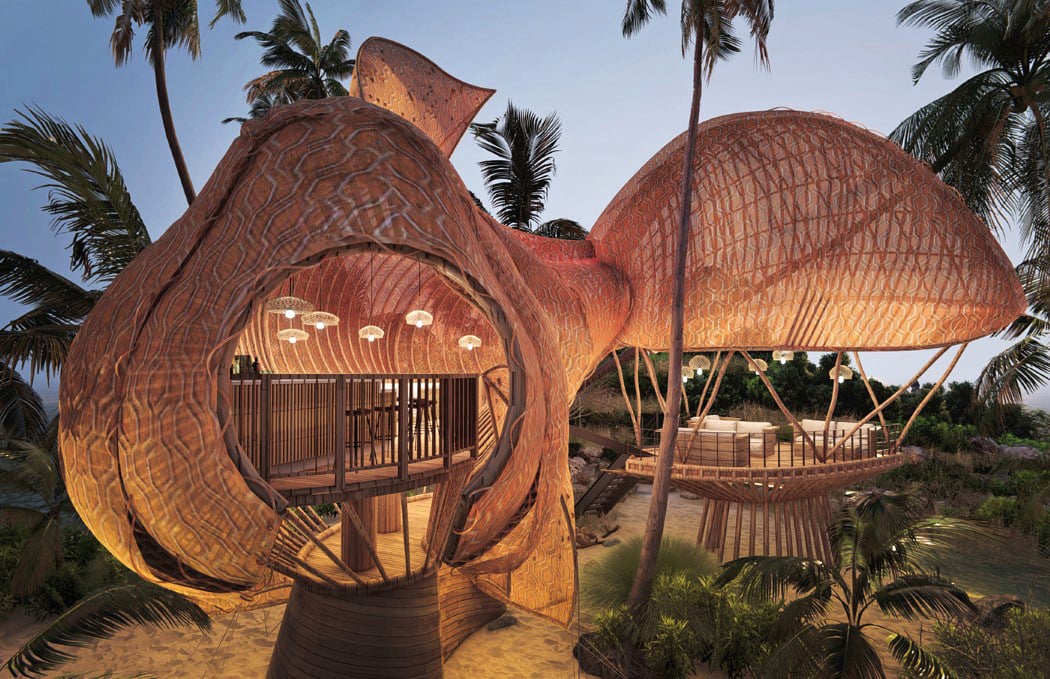 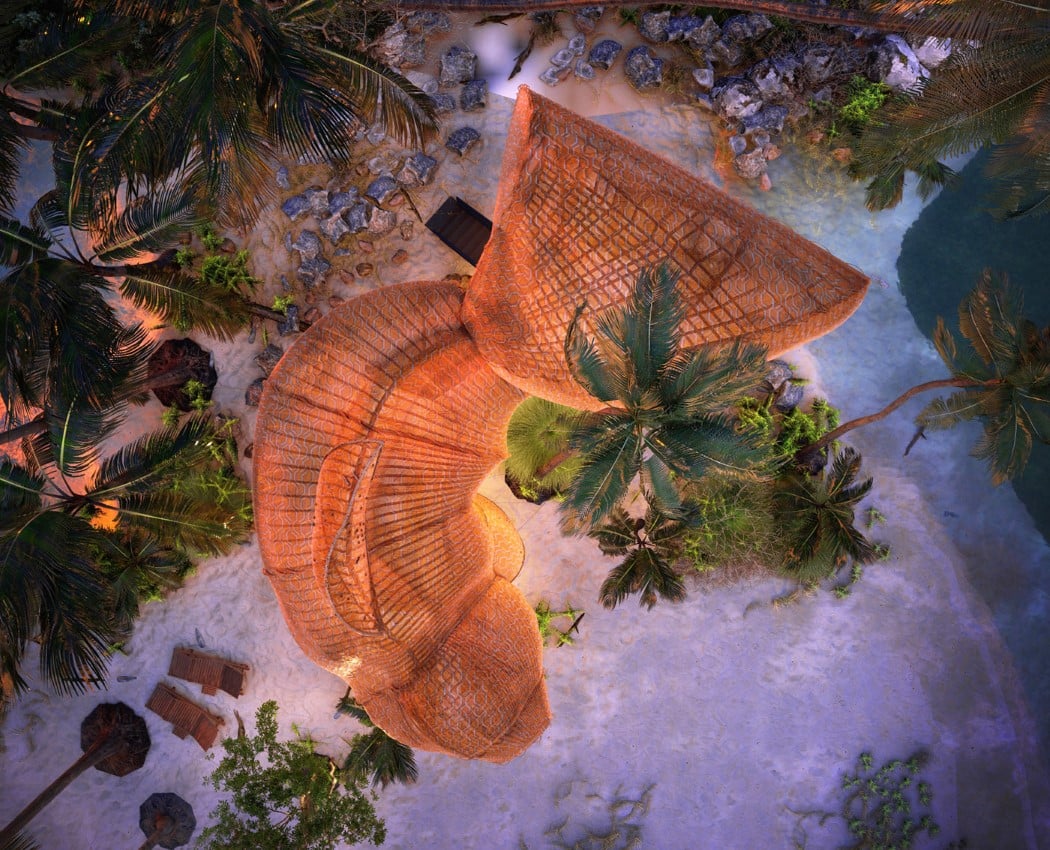 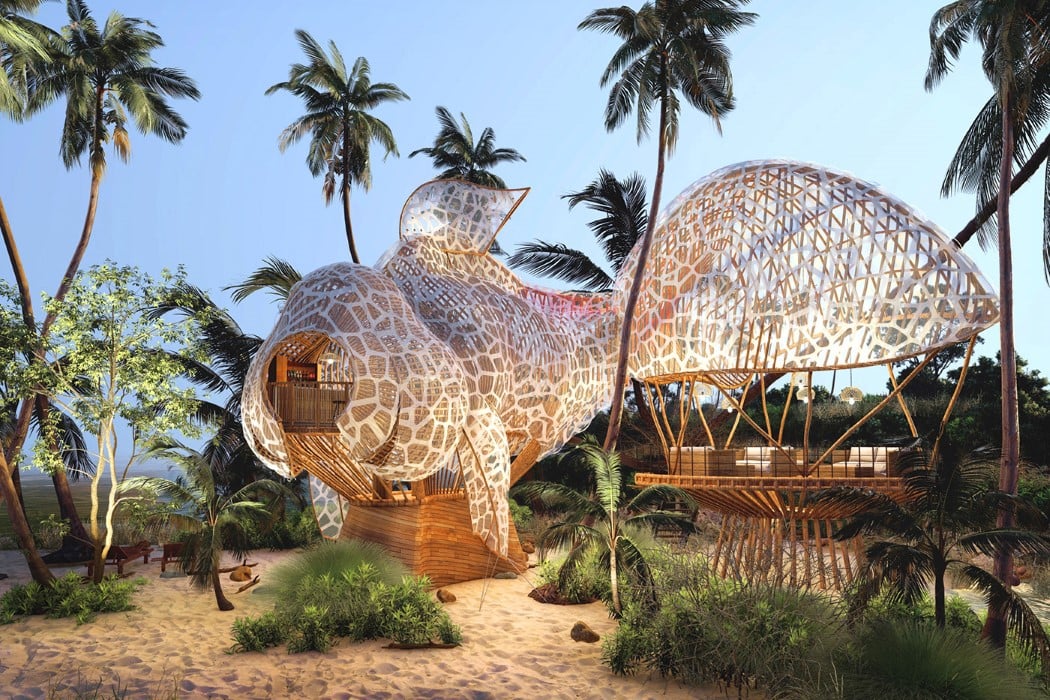 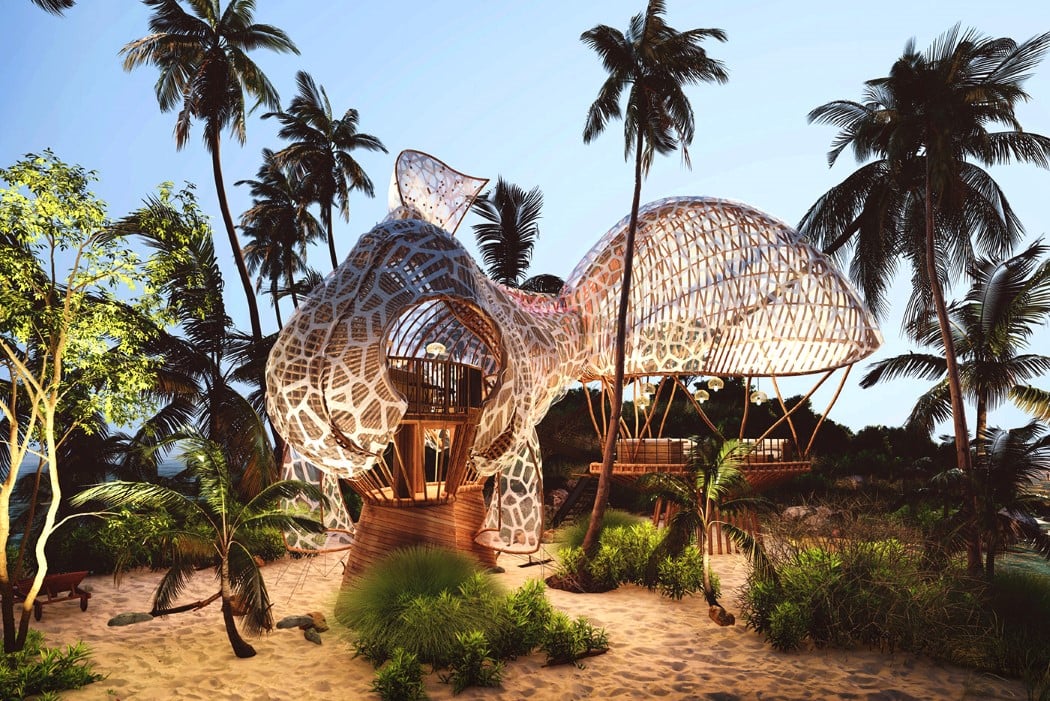 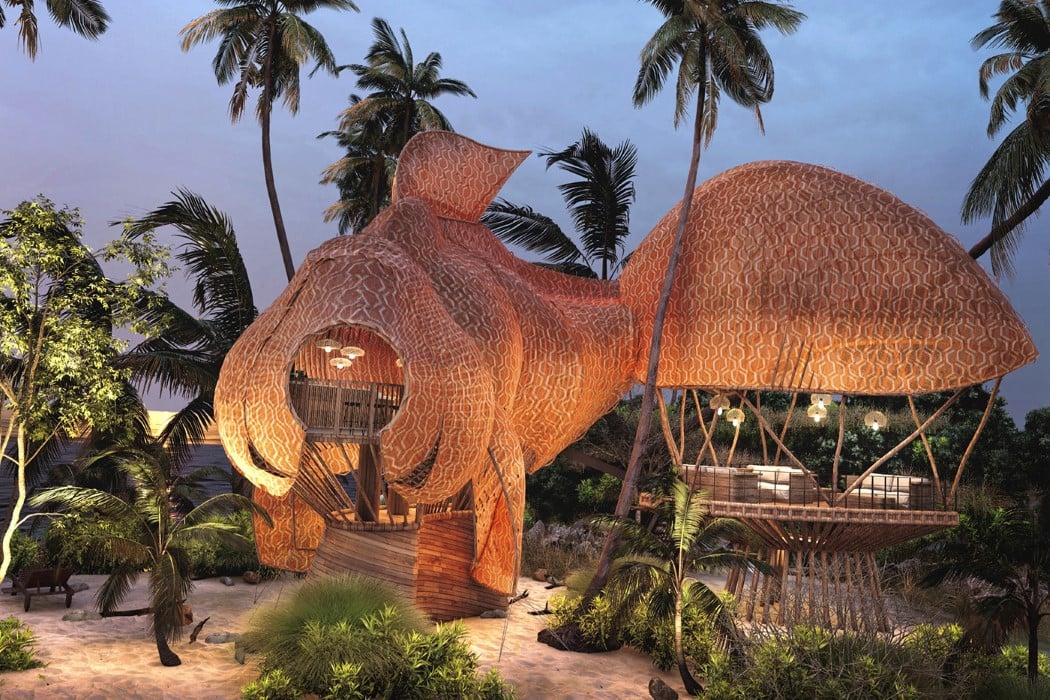 Much like a watch can be a time-telling artpiece that showcases mesmeric craftsmanship and handwork, the Goldfish Clock too was made to be a time-telling artpiece. The clock comes with a set of wall-mountable goldfish that can be arranged around it, turning your wall into a fishbowl with its sculptural beauty. Made in white, the clock as well as the fish blend in, while standing out through the play of light and shadow, allowing you to read the time too. The white hands tell the hours and minutes, while a rather alluring red dot on the seconds hand rotates around the clock, adding a drop of dynamism to the timepiece, while making it look like the fish are circling around the clock to eat the red dot.

The point of the Haoshi Goldfish Clock was to tell time but not strictly do just that. Also a piece of decor, the clock is sculptural yet minimal… and undeniably hypnotic! Oxygen is crucial for life on Earth. Humans and most other animals can not survive long without oxygen. Yet goldfish and their close relatives stay alive for days, even months, in oxygen-free...

Researchers in Western Australia have found that unwanted pet goldfish dumped into rivers were growing as large as 1.9 kg and damaging the habitat of other native fishes found in the waterways....

Researchers in Western Australia have found that unwanted pet goldfish dumped into rivers were growing as large as 1.9 kg and damaging the habitat of other native fishes found in the waterways....

For a lot of people, paying for a major surgery for their beloved dog or cat is too much. As sad as it is, the animal’s time has come. As an animal gets smaller and less cuddly, the likelihood of major veterinary care also seems to get smaller. Pet mice are way less likely to see a vet regularly than a dog, and goldfish are just straight up screwed, most of the time. People buy them for $0.19 without realizing that it’s going to cost hundreds to keep the things alive. This goldfish owner, who is “quite attached” to her fish, is clearly ready and willing to give his little colorful companion whatever is needed. This Australian goldfish, named “George,” just had a head tumor removed at the Lort Smith Animal Hospital in Melbourne, Australia. George was under general anesthesia for 45 minutes. Dr. Tristan Rich said of the procedure: “it’s quite fiddly, as you can imagine with an 80-gram fish, and you’ve got to make sure you can control any blood loss. He can only lose about half a mil.” Prior to the operation, George was unable to eat or swim normally, and was starting to “really suffer.”

Dr. Rich said that “George is now doing great; he spent a few days in the tank, and is now swimming happily in the pond.”

The goldfish might have gotten in these Japanese phone booths against their will, so the title is a bit misleading, but this does not mean that these new street aquariums are not stunning.

To us, geeks, phone booths will always have a special place in our hearts. Well, maybe not all ...
Continue Reading on Walyou