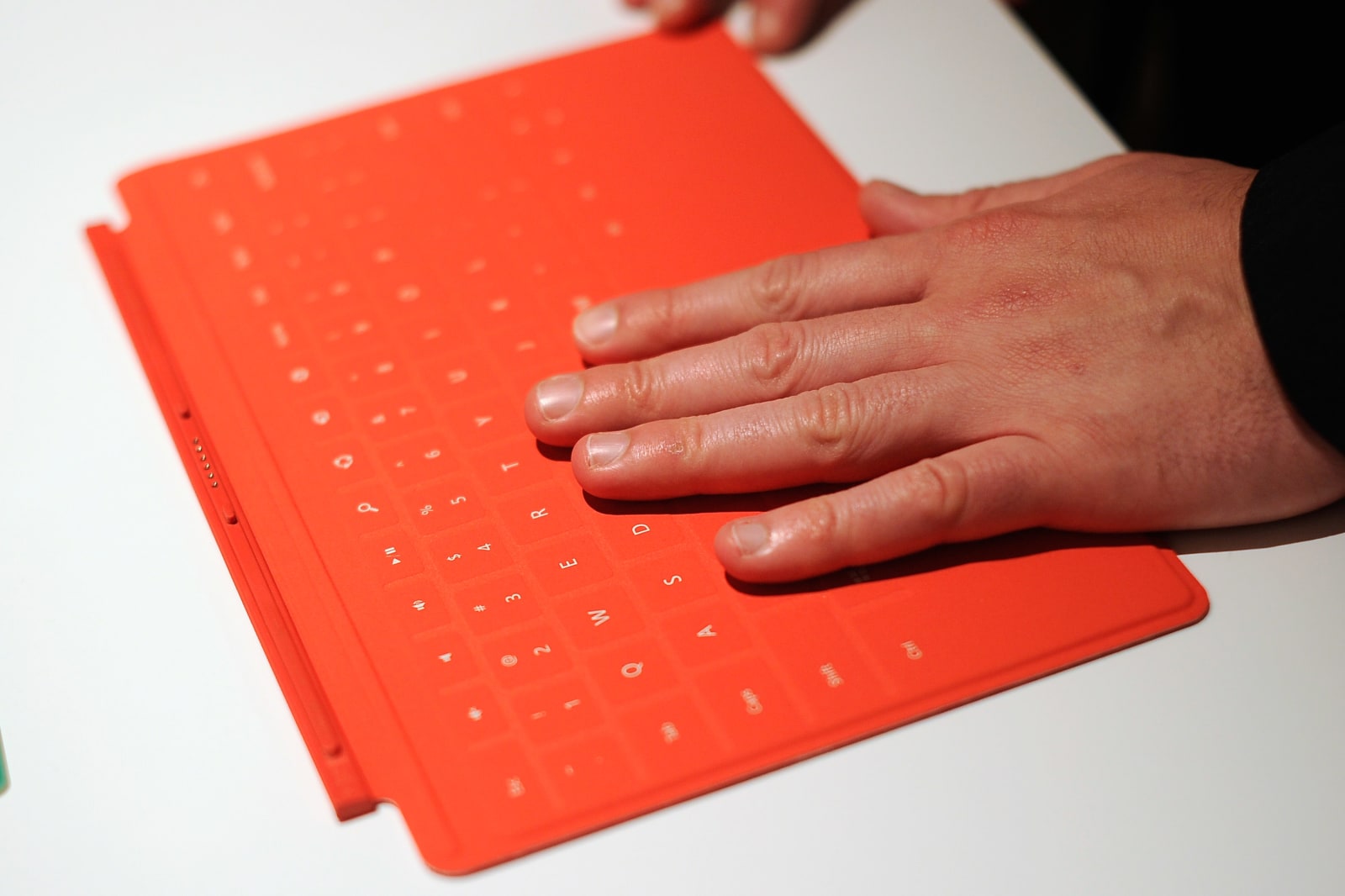 You might not have any inclination to buy a Surface Pro tablet if you're an iPad owner, but Microsoft may be happy to sell you the keyboard portion. WinFuture has noticed that Microsoft posted a battery document mentioning an unannounced iPad Touch...

In a move that should surprise few, that August price cut for Microsoft's Surface Pro -- which now starts at $799 for the 64GB version -- will remain in effect permanently. WPCentral has also revealed a $40 discount on Touch Covers, that now start at $79, and $50 off of the Surface RT tablet / touch cover bundle that starts at $399. The bundle pricing should kick in today although we're not seeing it live on the Microsoft Store yet. According to a statement from Microsoft (included after the break) this is based on customer's "exciting" response to the recent price drops. So, is this enough of a push for you to grab a slate (or two) right now, or would you rather wait for the sequel?

Update: While the original Surface Pro discount only applied in a few locales, we're hearing that the price in several European and Asian countries is also dropping. Word on price cuts for the accessories has varied from place to place, so depending on your location you may want to keep an eye out.

We weren't expecting Microsoft to make too many announcements here at Computex -- it's got Build coming up, after all -- but it did drop a little bit of news. The company just confirmed that Windows RT tablets will come with an Outlook app pre-installed starting with the Windows 8.1 update. Not much more to share today -- we already knew Windows 8.1 would arrive in preview on June 26th -- but hopefully we'll learn more at the Build developer conference in a few weeks. After all, as much as Microsoft has already revealed about Windows 8.1, it's said very little about RT, specifically.

Update: The official Surface blog does have a bit more information to share, mentioning that an update is coming "in about a week" to improve the Touch Cover and Type Cover keyboard accessories. Once that update arrives, there will be a few function key combos to trigger things like brightness (Fn + Del / Backspace), page navigation or toggle the function keys to charms, volume, etc (Fn + Caps). Check the post for a full list of commands.

There's no question that the Surface RT comes into its own with a keyboard cover; we can't imagine using the tablet unadorned. Microsoft can't, either, as it's launching a promo that gives the covers away. Americans and Canadians who buy the Windows RT slate between now and the end of June can get either the Touch Cover or the Type Cover for free, no matter which color they fancy. Surface Pro customers are out of luck, but it's hard to dispute the value for prospective Surface RT owners -- the deal amounts to at least a $100 discount on the touch PC's real-world price.

Update: To be clear, this promo has been running in other countries; it's just now debuting in North America, however.

Believe it or not, Inhon has a wilder concept up its sleeve than the extra-light Blade 13 Carbon laptop. Its equally new Carbon Tablet at first looks like it could pass for an IdeaPad Yoga, but the non-display half has little to do with input this time around -- besides USB 3.0 and Mini DisplayPort jacks, it's mostly about giving some breathing room to the Core i3, i5 or i7 inside. Keep the Windows 8 PC closed and it runs in a slower but quieter mode for handheld use; unfold it for some serious desk work, however, and a cooling fan inside ramps up to run the processor at TurboBoost speeds. Anyone who wants more traditional interaction has to attach an optional, Touch Cover-like keyboard and trackpad combo. We don't entirely grasp the logic when a convertible laptop might have done the trick, although estimated prices between NT $29,999 and NT $39,999 ($1,007 to $1,343 US) for the eventual launch in Taiwan will make it at least somewhat feasible to try Inhon's latest design experiment.

Microsoft would certainly argue that its Surface tablet design is iconic. The company is doing more than simply extolling the virtues of kickstands and VaporMg casings, however. It just obtained a trio of design patents that cover both the Touch Cover keyboard and the magnetic coupling on the tablet that so often gives Microsoft something to dance about. You won't find any deep insights into the technological workings here -- still, this might give some would-be Surface KIRF creators a reason to hesitate.

With Surface for Windows RT going on sale in just 10 days, Microsoft is finally ready to talk about pricing and availability -- not to mention, some technical details it left out when the tablet debuted back in June. After the Surface product page prematurely went live on Microsoft's site a few hours ago, the company just officially announced that the 10.6-inch, ARM-powered slate will go up for pre-order at 9AM PT today, starting at $499 for the 32GB version. The 64GB model will cost $599.

To be clear, these prices do not include that snazzy Touch Cover with the flat, pressure-sensitive keys. Rather, it'll be sold separately for $120. Ditto for the more traditional Type Cover keyboard, which is priced at $130. If you already know you want the packaged deal, however, you can buy the 64GB tablet and Touch Cover as a bundle for $699. Lastly, when Surface starts shipping on October 26th, you'll be able to buy it on Microsoft.com or at a Microsoft Store (if you happen to have one in your neck of the woods). If you're hankering for hands-on photos, we'll redirect you to the first look we published the day Surface was announced. Hopefully, though, we'll soon get a review unit so that we can supplement our preview with meaty, real-world impressions.

Microsoft Surface for Windows RT pricing now official: tablet starts at $499, keyboard not included originally appeared on Engadget on Tue, 16 Oct 2012 11:00:00 EDT. Please see our terms for use of feeds.

What's 3mm thick, crafted from the finest Polartec and attaches to a tablet magnetically? If you guessed an iPad smart cover you might be right, but right now we're pretty enamored with Microsoft's Touch Cover for the newly announced Surface. See, it works almost exactly like that other "smart" tablet shield, but this one actually earns it's smart moniker. When you peel the plastic shroud back it turns into a fully functional keyboard and touchpad. Obviously, being a thin plastic sheet, the cover is relying on touch for key presses, not the actual depression of mechanical switches. So, while that means it's theoretically possible to touchtype on this bad boy, it remains to be seen just how pleasant of an experience it actually is. Our guess -- it'll be fine for quick emails and Google Bing searches, but we probably wouldn't have to write the Surface review on one.

Now, the Type Cover on the other hand, perhaps we'd consider drafting lengthy posts on. It's safe to assume this one is thicker and heavier, turning your tablet into something more closely resembling an Ultrabook. But, it does have a traditional keyboard with solid plastic, separated keys as opposed to a pressure sensitive pad. Perhaps one of the more interesting features though, is their ability to force Win 8 to color coordinate with your chosen shade of folio. Click the blue Touch Cover on to the Surface and the background switches to a soothing shade azure. There's even an accelerometer inside those 3mm-thin softer covers -- which is an impressive feat of engineering. The Touch Covers can easily distinguish between you simply resting your hands on the keyboard and actually typing, which should help minimize accidental key presses. We'll be back as soon as possible with some hands-on.

Microsoft one ups other tablet 'smart' covers with Surface's Touch Cover and Type Cover originally appeared on Engadget on Mon, 18 Jun 2012 19:35:00 EDT. Please see our terms for use of feeds.