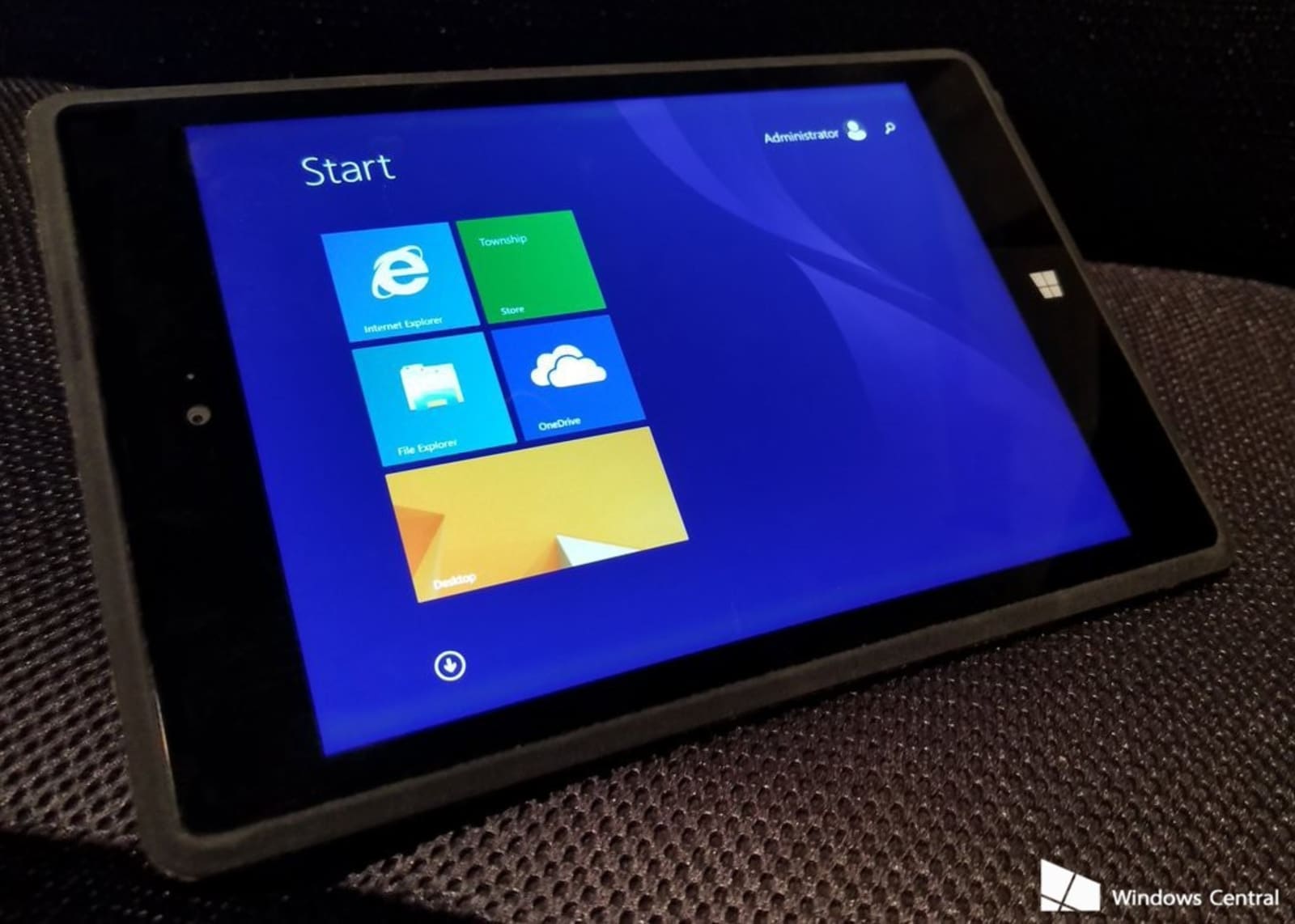 In the heady days of 2014, Microsoft had a dream of launching a smaller version of its nascent Surface tablets. The Surface Mini was a passion project of division chief Panos Panay, but it was axed by CEO Satya Nadella and EVP Stephen Elop shortly be...

UK-centric news is plentiful today while America busies itself with feasts and football. One such announcement concerns the launch of Nokia's first tablet, the Lumia 2520, which will go on sale December 4th exclusively at John Lewis and affiliate stores. Running Windows RT 8.1, the colorful 10.1-inch tablet will cost £400, while the optional keyboard accessory will retail for an additional £150 when it becomes available "in the coming weeks" (although we can't say we were enamored with the typing experience in our review). Curiously, John Lewis' monopoly means you'll have to go to extra lengths to make use of the 2520's LTE radio by procuring a 4G data-only SIM from EE or O2. Thus, you also can't take advantage of any carrier subsidies. There's no word on exactly when the exclusivity period will end, but if you just have to have one, you know exactly where to go.

The Lumia 2520 is Nokia's first Windows tablet -- and it may well be its last. By the time Nokia is ready to design a follow-up product, the Finnish firm might officially be a part of Microsoft. For now, though, the Lumia 2520 is about to go on sale worldwide under the Nokia brand, and will compete directly with Microsoft's Surface 2, the only other Windows RT tablet available right now. Like the Surface, it's a flagship-caliber device, with a 1080p screen and top-of-the-line processor. But whereas Microsoft sees the Surface as kind of a laptop/tablet hybrid -- a real productivity device -- the 2520 is, at its heart, just a tablet. The 2520 has no kickstand, no full-sized USB port -- not unless you buy the optional keyboard cover, anyway.

Nokia also brought its A-game imaging wise, installing the same camera used on the Lumia 720 (hey, for a tablet that's actually unprecedented). Additionally, there's one other thing the 2520 has that the Surface 2 doesn't: LTE. In fact, you can't even get the 2520 as a WiFi-only device; you can either buy it unsubsidized for $499, or you can purchase it here in the US for $400 on-contract. So it definitely looks good on paper (and in press photos), but what's it like to use? Turns out, it's pretty nice.%Gallery-slideshow122333%

Verizon isn't going to let AT&T hog all the Lumia 2520 buyers this weekend -- it just announced that it will start selling Nokia's Windows RT tablet on November 21st, one day before the device is available at AT&T. Pricing will remain the same at $500 contract-free or $400 on a two-year term, but Verizon is sweetening its deal by offering a carrier-appropriate red model to online shoppers; retail customers will have to be content with black. There's no word on 2520 variants for other carriers, but it's good to know that Americans will have at least some choice in networks when picking up Nokia's LTE-equipped slate.

If you've been jonesing for that other flagship Windows RT tablet, you won't have long to wait. AT&T has just announced that it will release the Nokia Lumia 2520 on November 22nd for $400 when paired with a two-year data contract. It will launch only in black, unfortunately, rather than the vibrant colors you see above. However, there is a perk if you're going all-in on Nokia hardware -- buy a Lumia 925, 1020 or 1520 at the same time and the carrier will drop the 2520's price down to $200 with a two-year agreement. If you're eager to learn more about the LTE slate, you can check out AT&T's quick tour video after the break.

Update: We've since confirmed with AT&T that the Lumia 2520 will be available for $500 contract-free, as Nokia originally promised.

@evleaks is at it again. This time the prolific leaker has blasted out two screen grabs of an app called Storyteller, which made a Live Tile-cameo in the alleged screencap of a Nokia Bandit, an oversized Windows Phone 8 device. The app appears to be a Windows 8 and WP photo album that lets users sift through images by timeline, favorites and shared, or browse them on a map. A close look at the top right of the application meant for larger devices reveals a "My tablet" menu, suggesting it boasts integration with slates. Given that @evleaks mentions Bandit, Espoo's long-rumored Sirius pad and October 22nd event date, it's a safe bet that we'll see new hardware -- and at least one new app -- this fall.

We have to hand it to Nokia: the company faces an acquisition by Microsoft in the very near future, but it's still got a few tricks up its sleeves. The FCC just approved a mystery device known as the RX-114, and Nokia's team did an incredible job of dressing up the paperwork so as to hide all clues of what it really was -- that is, right up until the last page of a 167-page document full of bland measurements and technical graphs. What you see above is official confirmation that Nokia is indeed working on a tablet, complete with diagrams of the device along with specific references to its slate-like state. (Forgive the fuzzy print; the diagrams are pretty small, so we enlarged them.)

What else do we know? The docs confirm that the tablet features LTE with support for bands 2, 4, 5, 13 and 17, along with a full suite of HSPA+ and GSM / EDGE. This means that regardless of which carrier actually picks up this particular device (frequency support doesn't guarantee carrier coverage, and no networks have confirmed that they'll be selling it), it technically will work on Verizon, AT&T and T-Mobile. Of course, we've already seen purported leaks that show the Windows RT device with Big Red branding, so it's not a far stretch to believe this is still in the works for one or more US providers. We'll continue to parse through the paperwork for other cleverly hidden clues, but this at least confirms what we already suspected -- and if we had to guess, we have a strong suspicion that we'll be seeing this beaut in the flesh at Nokia World in Abu Dhabi on October 22nd.

If you're dead-set on a Windows RT tablet, it's increasingly looking like the Surface 2 will be your only option. After Samsung and Lenovo discontinued their respective devices, Dell is also apparently giving up on the beleaguered OS: the XPS 10 is no longer listed for sale on Dell's site. What's more, the company is pointedly suggesting that users buy the Latitude 10 instead (that's a tablet running full Windows 8, with a more powerful Atom processor under the hood). Of course, it's possible Dell's just sold out for the moment, but given the unpopularity of Windows RT devices in general, and the fact that Dell declined to refresh the XPS 10 with another RT device, we're guessing not. At any rate, we're asking Dell for comment and will let you know if we hear anything.

Update: Dell wouldn't confirm or deny that the Dell XPS 10 has been discontinued. Instead, a rep for the company gave us this coy statement: "We're going to be announcing our full tablet portfolio at the event in New York next week and will be providing full details then." See you guys on October 2nd, then.

[Thanks to everyone who sent this in]

We weren't surprised when Microsoft unveiled new Surface 2 and Surface Pro 2 tablets at its New York City event. However, the company still had a few surprises up its sleeve, including a Music Kit, significantly improved keyboard covers and a 4K-ready docking station. You may have missed out on a few of the announcements the first time through, but don't worry -- we've rounded up all of the Surface news in one place, including our hands-ons and post-event commentary. Check out the stories linked after the break and you'll know what to expect when Microsoft ships its second-generation Windows slates.

What's the definition of insanity? Trying the same thing several times and expecting a different outcome. While we wouldn't suggest that Microsoft's finest minds are in need of urgent medical care, it does seem as if the company's executives have failed to heed the lessons doled out this summer. After all, it was only a few months ago that Microsoft had to admit that very few Surface RT tablets had been sold, and booked a $900 million loss on inventory that remains rotting in warehouses.

At today's launch of Microsoft's second Windows RT-running slate, Surface chief Panos Panay opened his remarks by saying that the "Surface 2 is not subtle, but is a revamp. It is not the simple changes that everybody wants, but it's the changes people need." Unfortunately, the changes that he then went on to describe involved making the device thinner, faster and giving it a full-HD display -- criticisms that few had leveled at the first generation of the hardware. No, the problems that every critic had were the limitations of the Surface's operating system: Windows RT. Not that you'd know it from today's event. In fact, Microsoft went out of its way to downplay the fact that the Surface 2 runs RT, mentioning the ambitious Windows-on-ARM project only three times in an hour. But why was the star of the show reduced to such a bit-part role?