The popular gaming franchise Mario Kart by Nintendo is a spin-off from the Super Mario series and it goes a long way back when first released in 1992 for the Super Nintendo Entertainment System. The game has seen generations of players battling it together over the years for pure fun, it is indeed nostalgia personified in every sense. The game has evolved in the last decade or so – becoming a staple for a gaming console and mobile device users alike. So what would have been the next big leap for Nintendo to take?

Bring the game environment to the real-world in a mixed reality experience which sees you and your pals racing for supremacy in the cozy confines of your home this Holiday Season. Yes, that’s true as you can turn your living room into a race track for the most exciting entertainment because binge-watching Netflix is so mainstream! Nintendo calls it Mario Kart Live: Home Circuit which fuses classic kart racing in the real-world with an augmented reality environment. It is actually a two-part acquisition – one you have to download the game from Nintendo Switch eShop which solves the gaming interface bit, and the other a $99.99 RC kart (with either Mario or Luigi) and a stack of 4 cardboard gates which shape the racing track in any space inside your home. These cardboards are the checkpoints for the race circuit and the kart needs to pass through them, till the last one to register a complete lap. The track’s turns and straights are left to your creative building – using things like sofas, tables, kids’ toys, or coffee cups for instance to craft the race track in a space as small as 15 x 15 feet!

The kart has an on-board camera for the live feed on your Nintendo Switch to get the close-up racing action. Mixed with the augmented reality elements, the experience promises countless hours of fun with up to three other players. The only requirement being – each player needs to have a separate Switch to participate in live races against each other. The idea is purely fun and resonates with everyone stuck indoors who loves the sense of adventure. Of course, there are things like your grumpy cat (who doesn’t like things moving on wheels) to consider which brings an unexpected twist to the racing environment. Nintendo has got this right and the prospect of getting creative indoors in such a volatile environment outside will keep you hooked for hours at end! 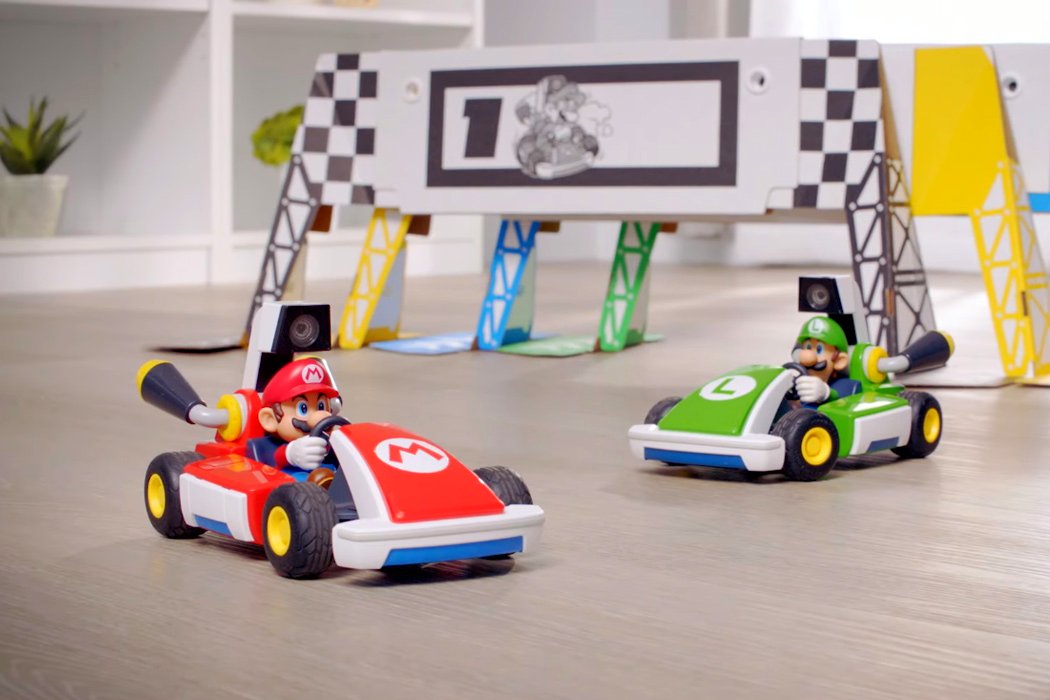 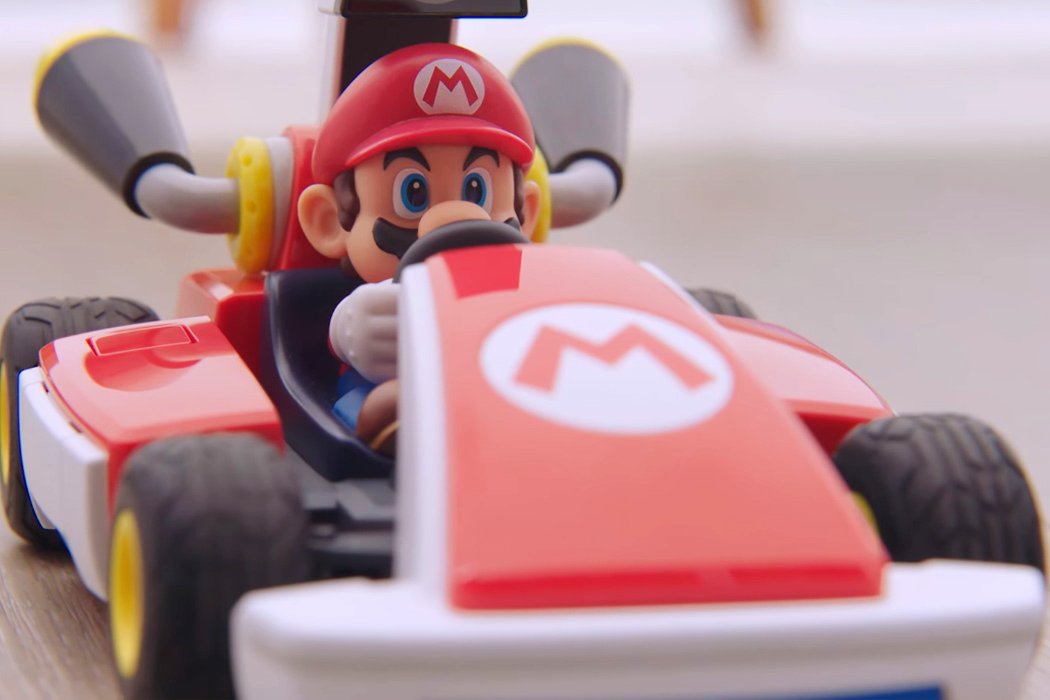 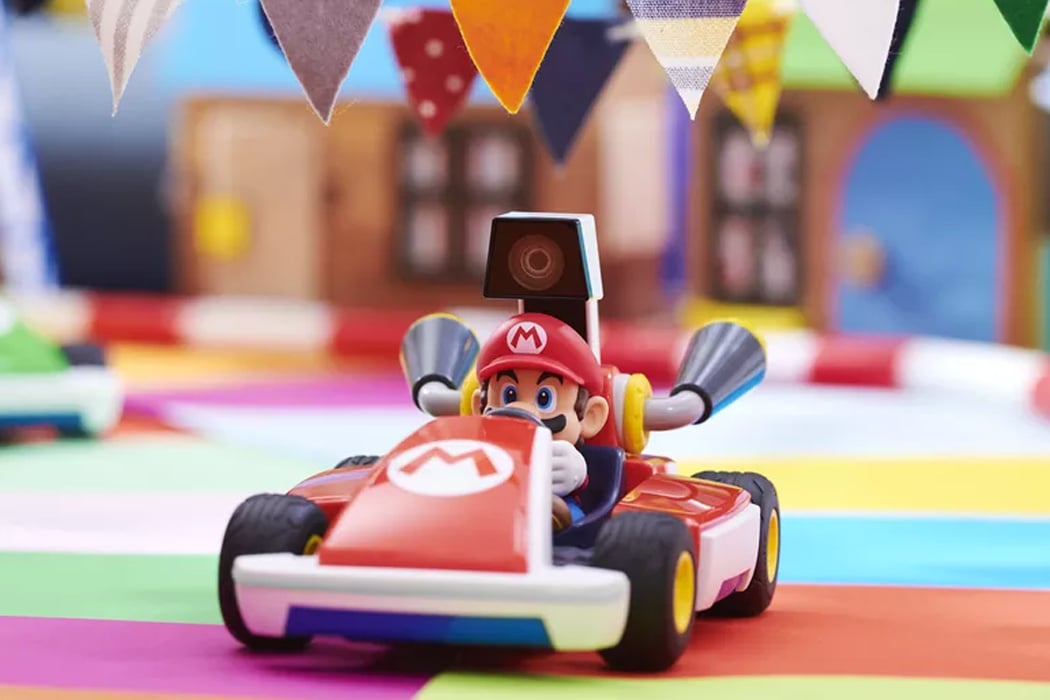 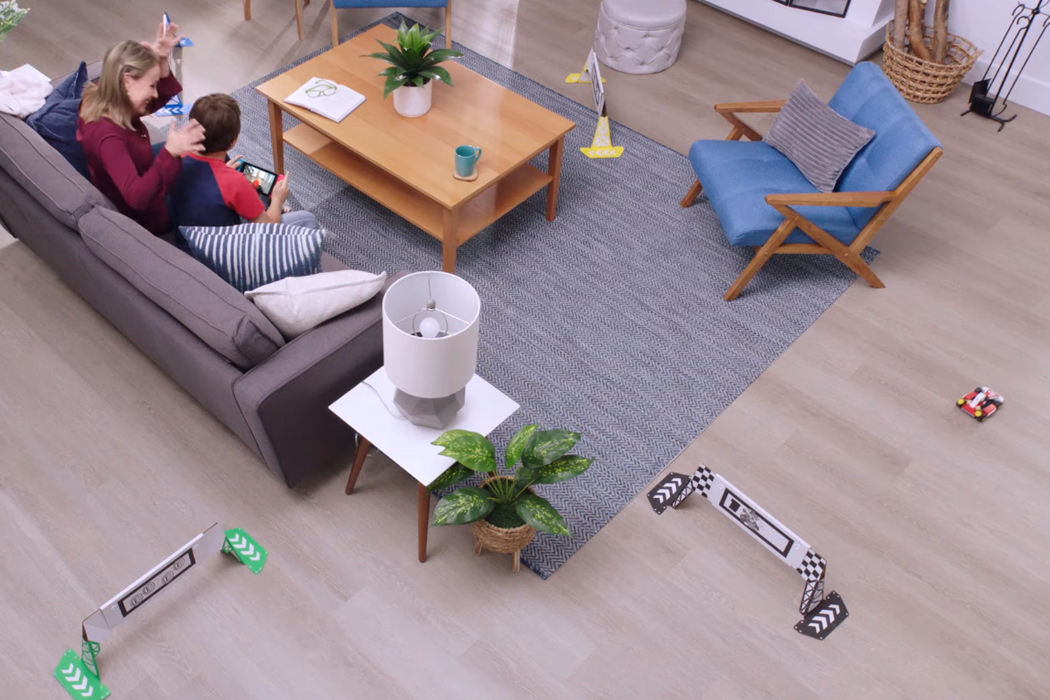 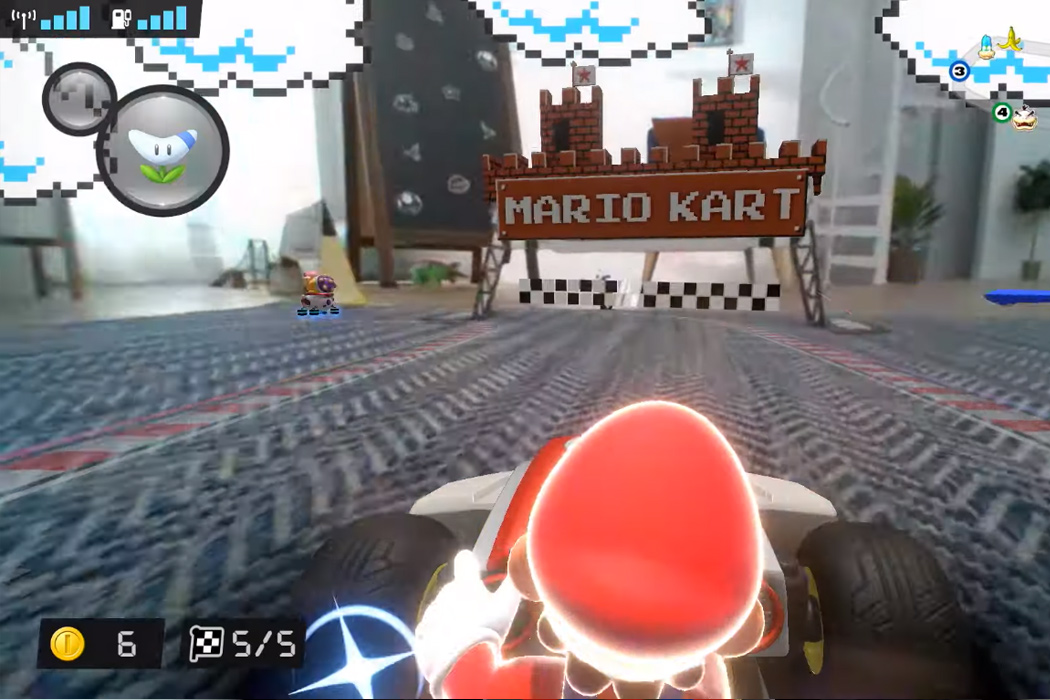 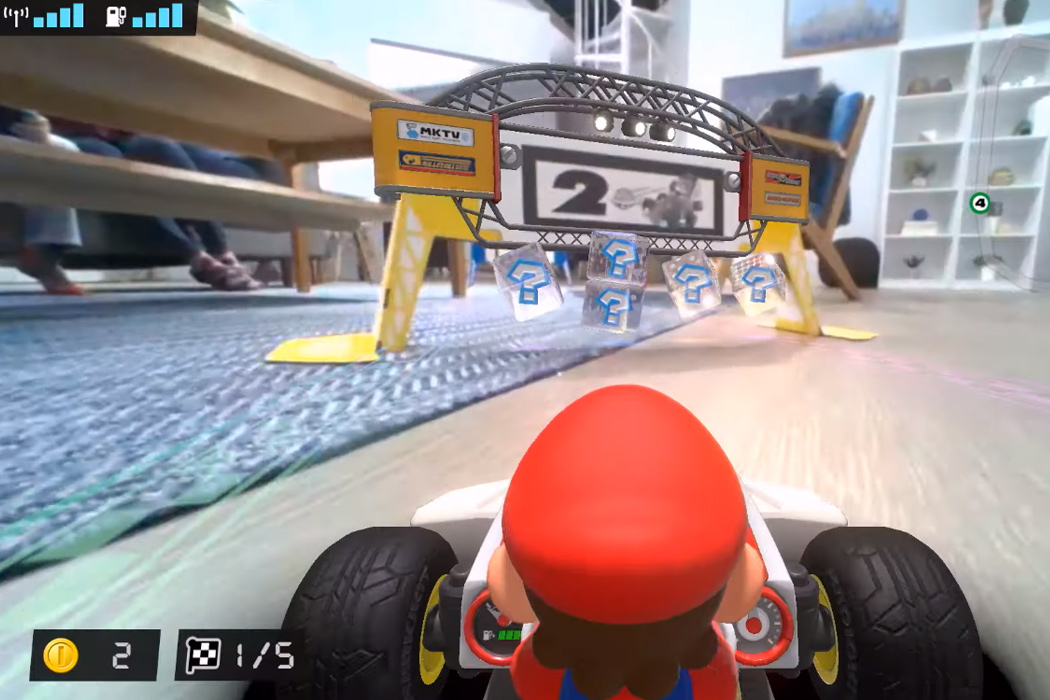 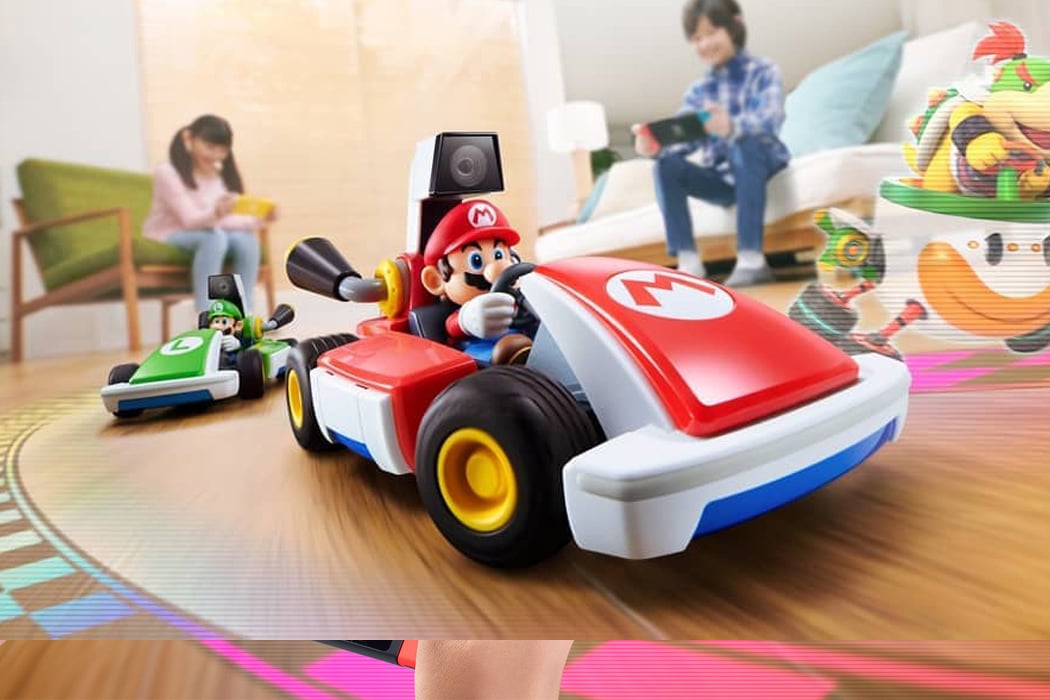 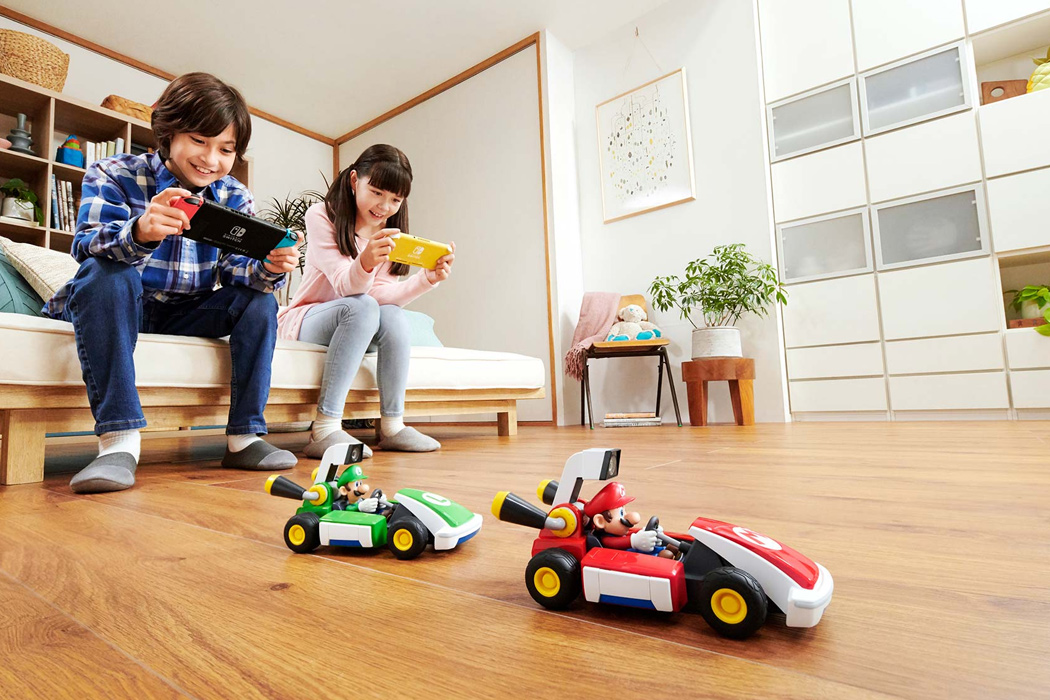 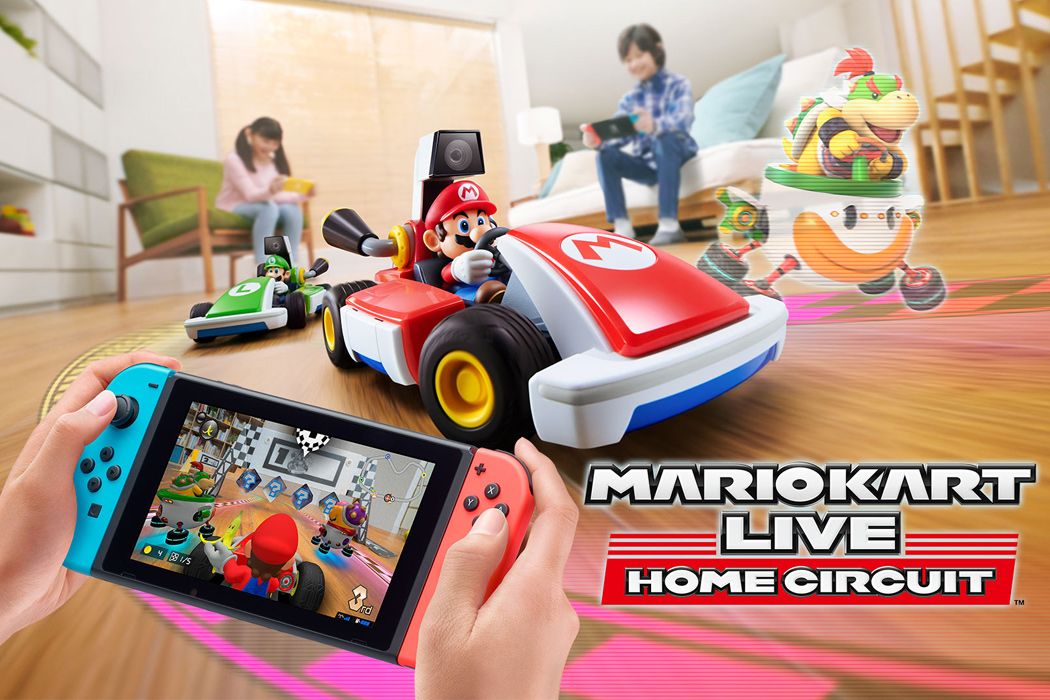 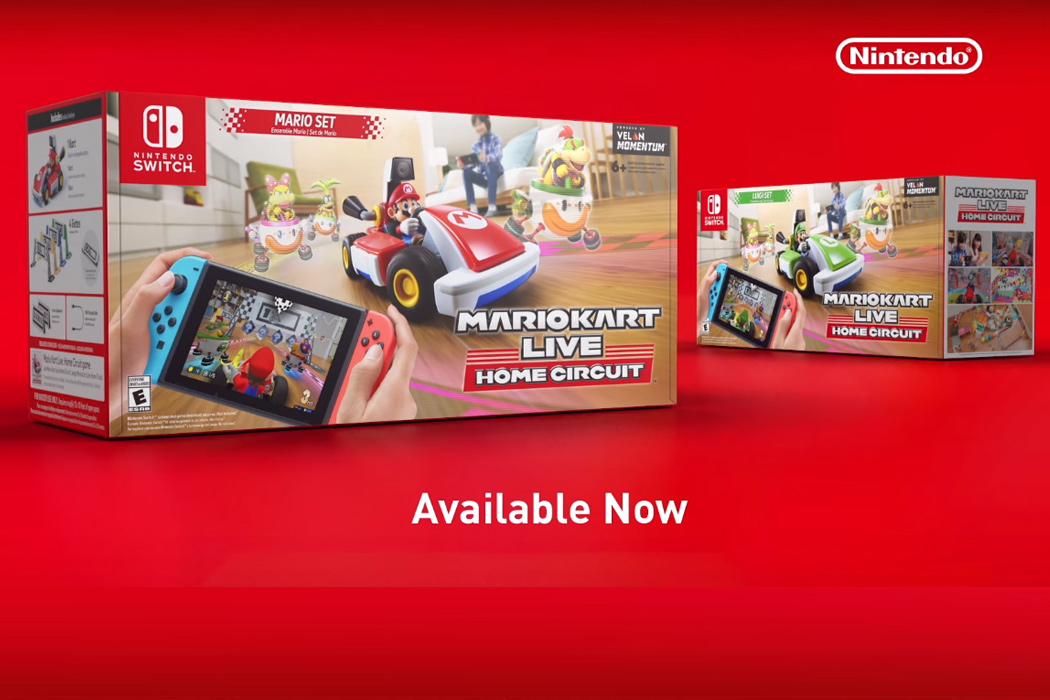 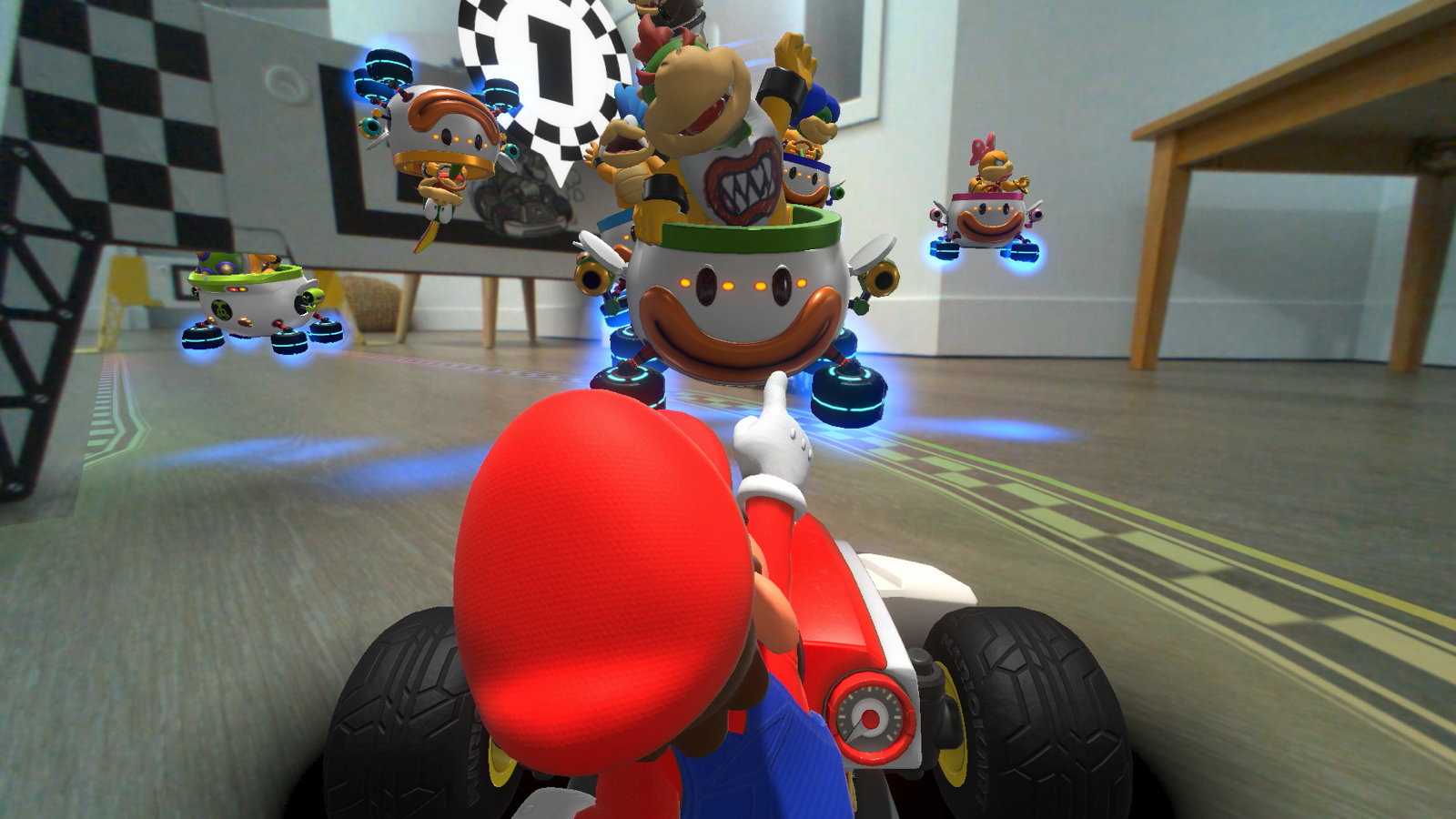 Mario Kart Live: Home Circuit was actually announced last month, but today Nintendo revealed new details about the “mixed reality” game ahead of its launch on October 16th. The software is free to download but it won’t work without one of the camera-... 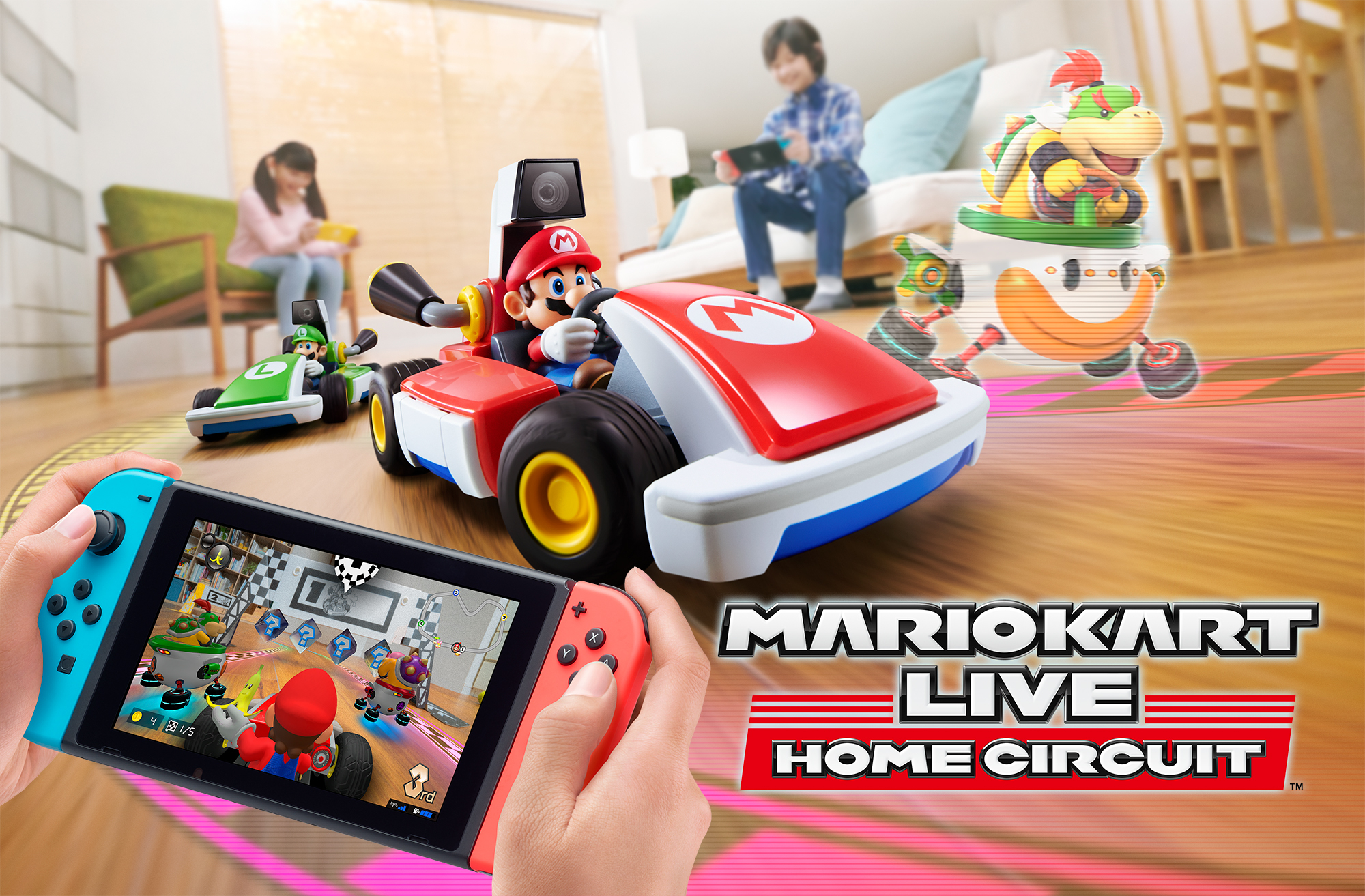 Nintendo is celebrating the 35th anniversary of Super Mario Bros. with lots of truly wild announcements, but the most peculiar by far is a new Mario Kart game that only partially plays out on the Switch.When it launches on October 16th, Mario Kart Li... 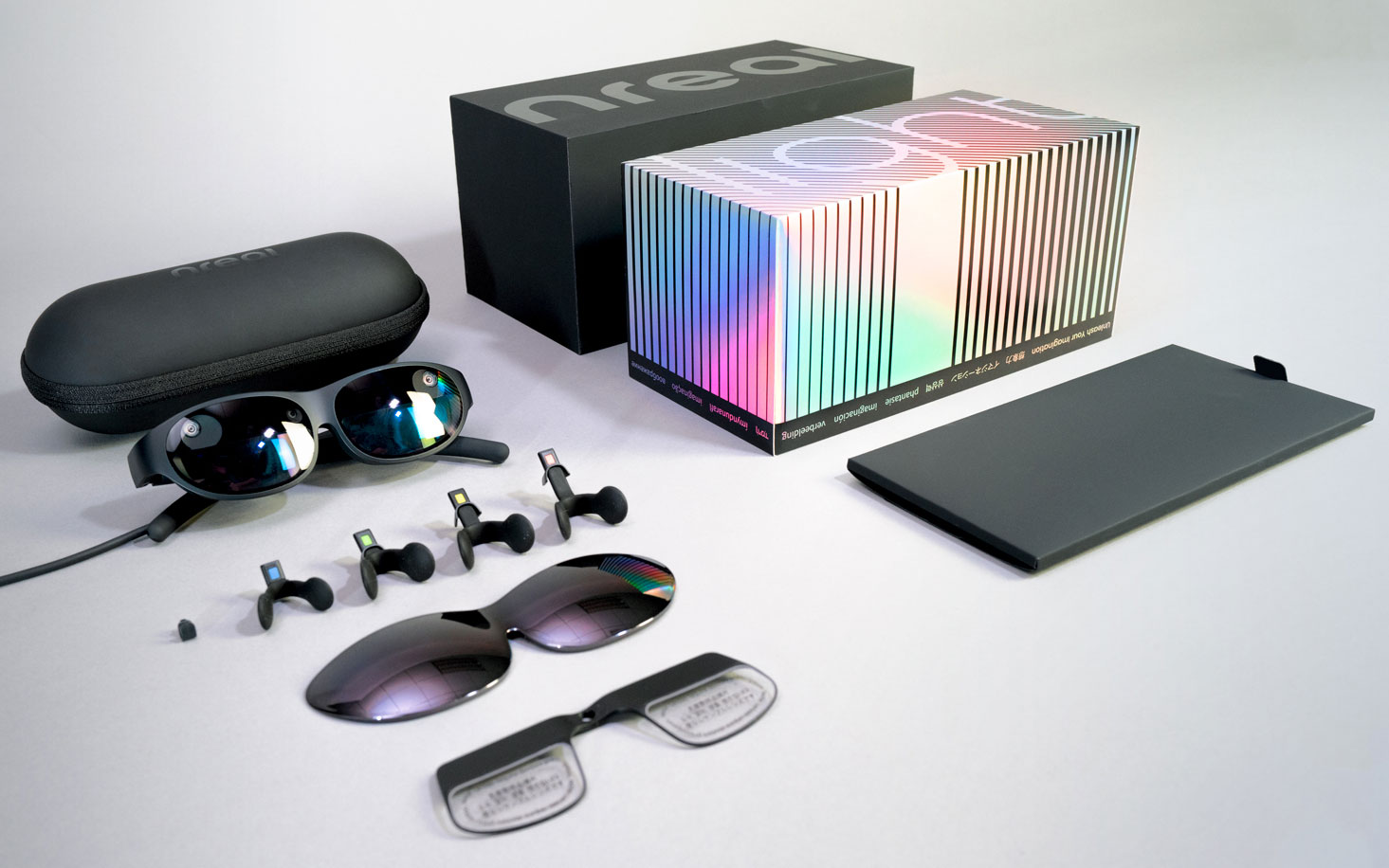 After successfully fighting off Magic Leap’s claim that it stole trade secrets, Nreal is finally able to launch its Light mixed reality glasses into the consumer market. Starting today, folks in Korea can pre-order the Light — locally rebranded as “U...

Fading light: The story of Magic Leap’s lost mixed reality magnum opusAdi Robertson, The VergeLike a lot of companies this year, Magic Leap faced massive layoffs. The company was able to avoid those after it raised $350 million, but it did shift to e... 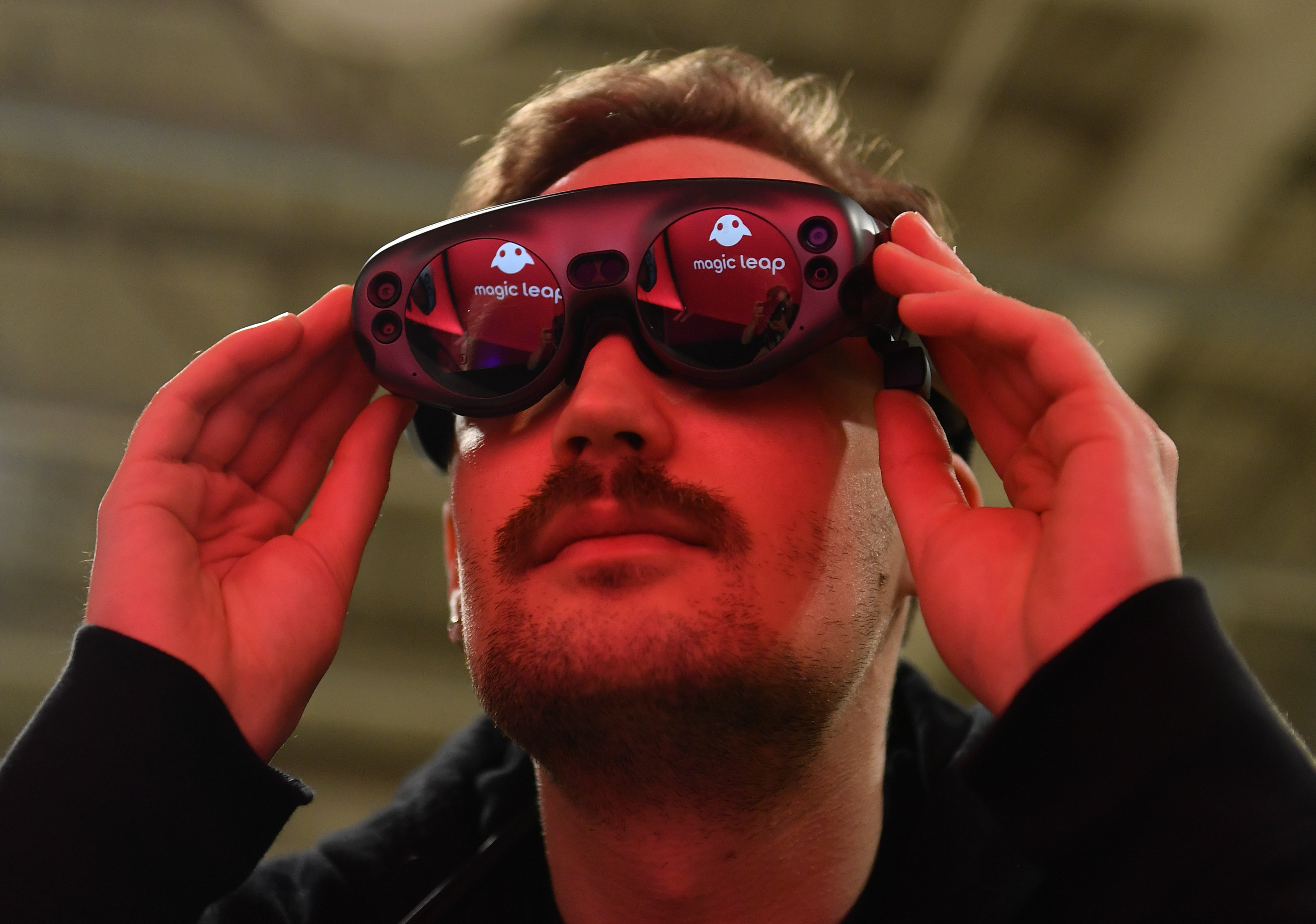 Augmented-reality headset maker Magic Leap made a fairly serious accusation last year, when it claimed that former employee Chi Xu had used “stolen” company secrets to set up his own business, Nreal. The Beijing-based Nreal made waves at CES in 2019...

About a month after augmented reality company Magic Leap announced significant layoffs, things have seemingly turned around a bit. Last week we heard that many of the rumored 1,000 layoffs had been put on hold after the company secured $350 million i... 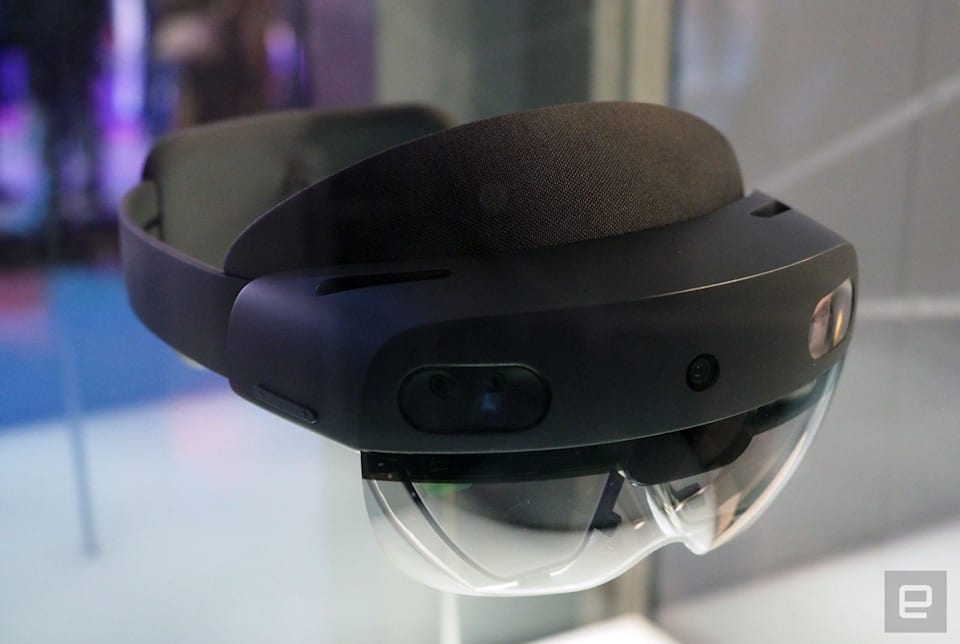 It's been over six months since Microsoft's HoloLens 2 started shipping to customers -- now, the company says it's aiming to bring the augmented reality headset to more countries by the end of the year. That includes Spain, Taiwan, South Korea and Ho...

HTC’s ambitious Project Proton does something very remarkable not for augmented reality technology, but rather for how we perceive AR tech. Project Proton was supposed to form a part of HTC’s announcement at the now-canceled Mobile World Congress. It expands on HTC’s Vive Cosmos headset, which offers the ability to work with Mixed Reality by using cameras on the headset that capture the outside world for the eyes on the inside. Here’s the problem with headsets though (and I’ve said this before)… they look horrible.

It isn’t the fact that they just look horrible, AR and VR headsets are literally a visual disconnect from the world. You know how you hesitate to talk to someone who has headphones on? Imagine that hesitation with someone who has a black toaster strapped to their face as they interact with virtual objects, looking almost like demented zombies in the real world. Face to face conversations become very difficult when there isn’t a face to look at, but HTC’s Project Proton could solve that. The mixed reality headset concept actually borrows from eyewear, and is designed to look like a pair of skiing goggles (or a popular Marvel superhero’s mask) rather than a black box that blocks 70% of your face. The design is split into two, with tinted pieces of glass covering the headset’s two ‘eyes’. Just like when you’re talking to people with heavily tinted sunglasses, you don’t see their eyes, but it’s still easy to have a conversation with them because the sunglasses are structured in a way that allows your brain to put two and two together to perceive someone’s face. By using two tinted eyepieces styled in a way to look like voguish glares, HTC’s hoping to make Mixed Reality headsets that still keep you grounded in reality… even more so by shaping how people around you perceive you.

The company hasn’t officially released any information on the Proton headsets, but I assume a press-release with specs, a price-tag, and launch date should be underway.

Deciding to be more than a smartphone company, OPPO unveiled its expanded vision of the future at its Inno Day 2019 conference. Designed to be OPPO’s answer to the Microsoft Hololens, the mixed reality headset comes with a similar design with the inclusion of a forehead-rest, and runs OPPO’s Glass OS.

The company hasn’t revealed any tech specs or even its tentative pricing yet, but OPPO is gearing for a 2020 launch. The Glasses, however, come with features that put it at par with the Hololens. They include support for 3D sound, in order to offer a truly immersive AR experience, while sporting as many as 4 cameras (two fisheye, one HD, and one Time-of-Flight) to accurately capture the world around you in visual as well as physical detail to help you position, track, and interact with objects in your view. And here’s the most promising bit. The glasses even come with 5G support, for a seamless mixed reality experience!