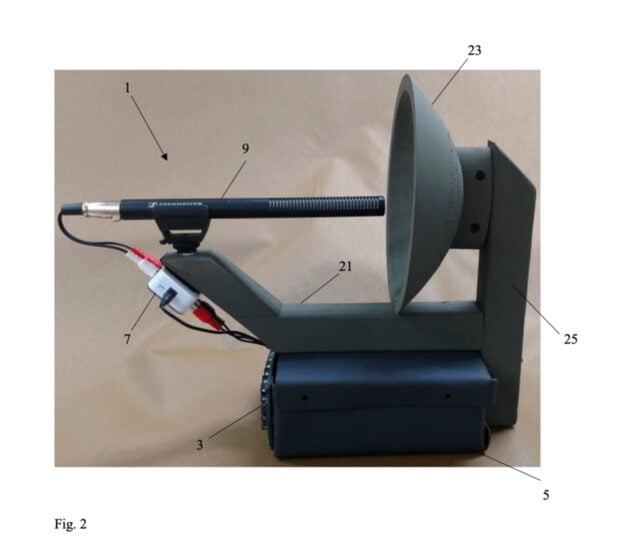 When I was a kid, the best way to get my brothers to stop talking was to repeat what they said right after they said it. Now, the U.S. Navy has taken that simple concept and expanded upon it to disrupt people from speaking at a distance. Their invention, known as the handheld acoustic hailing and disruption (AHAD) system, captures speech using a long-range microphone, then plays it back after a brief delay. Not only is the result annoying to its target, but there is also scientific evidence that playing back one’s speech immediately after speaking can quickly disrupt our ability to speak coherently.

The AHAD system was invented by Christopher A Brown of the Naval Surface Warfare Center, and the Patent abstract below explains how it works:

While the Navy could use such a device to prevent terrorists from communicating or disrupting military activity, I could also see this tech being used for nefarious purposes, like preventing free speech at protests. On the other hand, I’d love a personal version of this that I could use during boring PowerPoint presentations. 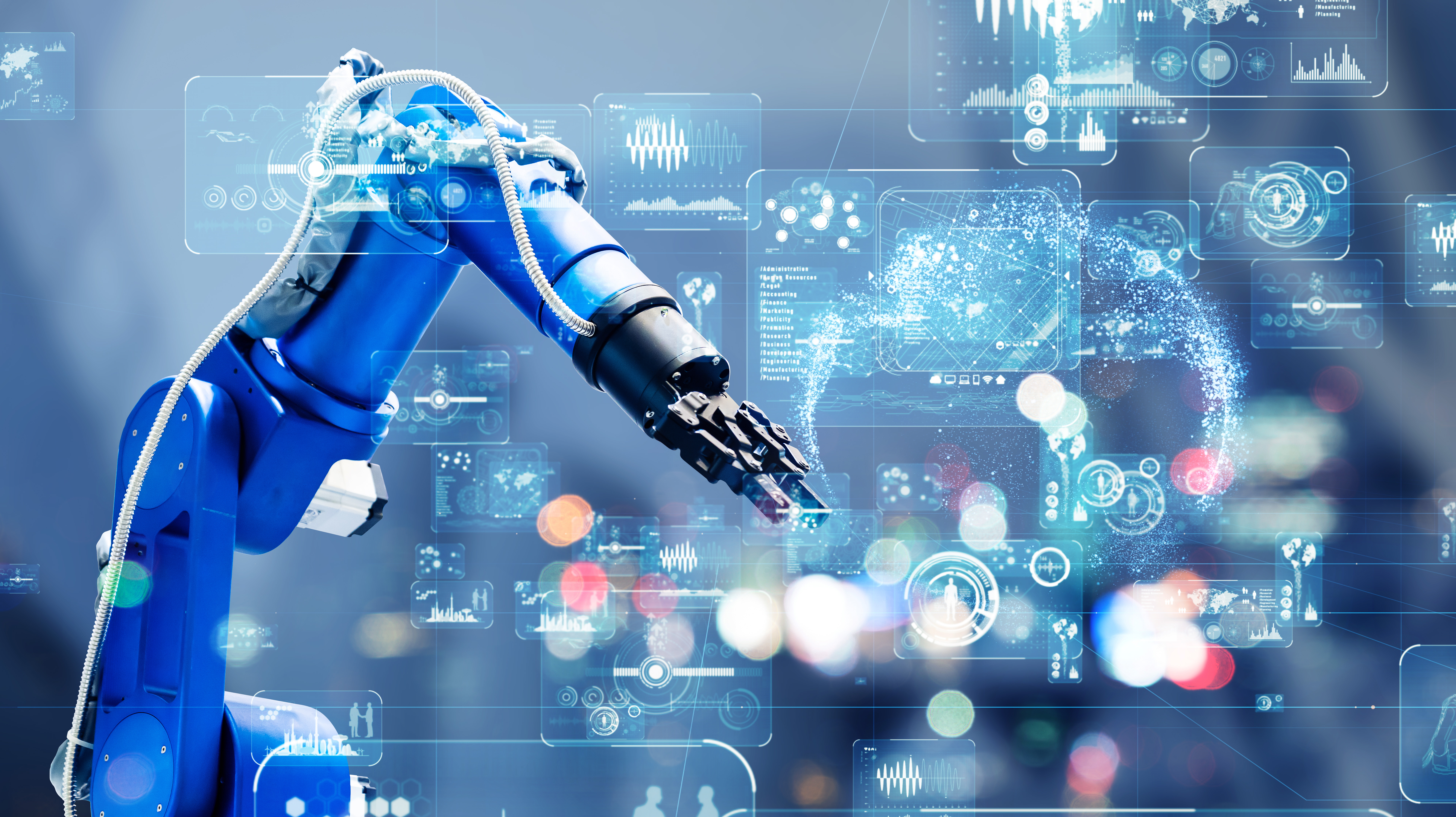 Artificial intelligence has myriad use cases, but it turns out inventing devices isn't one of them -- at least in the eyes of the US Patent and Trademark Office. The agency issued a decision on two patent applications for devices created by an AI sys...

I love any tool that makes projects around the house easier. I mean, having a robot to do all of my projects would be best, but that isn’t happening anytime soon. Besides, you can’t trust a robot with a hammer. But things like this innovative hammer will make life easier. 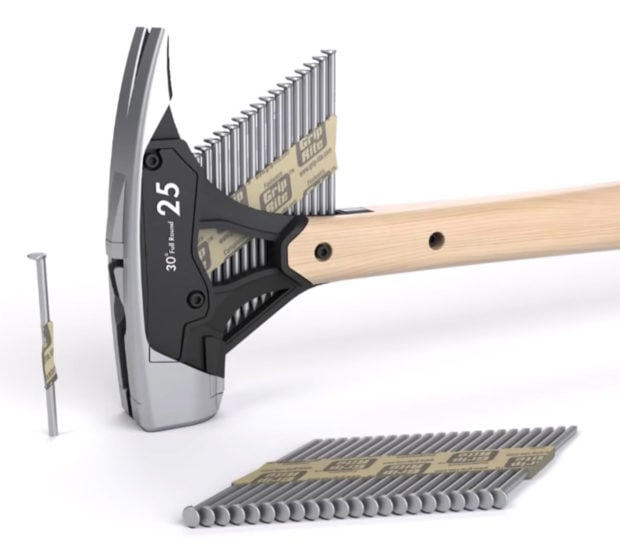 Designer Michael Young developed this hammer that’s capable of dispensing its own nails – probably because he also has no hammer robot. It dispenses collated framing nails as you need them. This tool should save you a lot of time and energy while doing your work. You just load the nail cartridge in and start hammering. When you need it to dispense a nail, just tap the side of the hammer against a hard surface to set the mechanism, then tap the hammerhead where you want the nail, then drive it in.

It’s a pretty brilliant design, and I can’t wait to buy this one when it hits the market. It might help people to not whack their thumbs when they set nails as well. That happens to me all of the time. Of course, I like to get hammered when hammering, which probably doesn’t help. I guess I thought that was what MC Hammer meant when he said “hammer time.”

[via Boing Boing via Geekologie]

The Furby Organ is an incredible hack by the Sam Battle, who is running the "Look Mum No Computer" Youtube channel. He wired up 44 of the 90s viral toy to use it in a music instrument. Battle is...

I learned a few things the hard way when my son was born. For instance, I knew you had to keep a hand on the baby while they were on the changing table lest he roll off. No one told me the second you take off a diaper, the baby will literally pee everywhere. I mean I had no idea until he started screaming because he peed in his own eye, on the wall, on my arm, and directly onto the other clean diapers in the instant I looked away for a wipe. I didn’t even know it was possible to pee in your own eye before that incident. 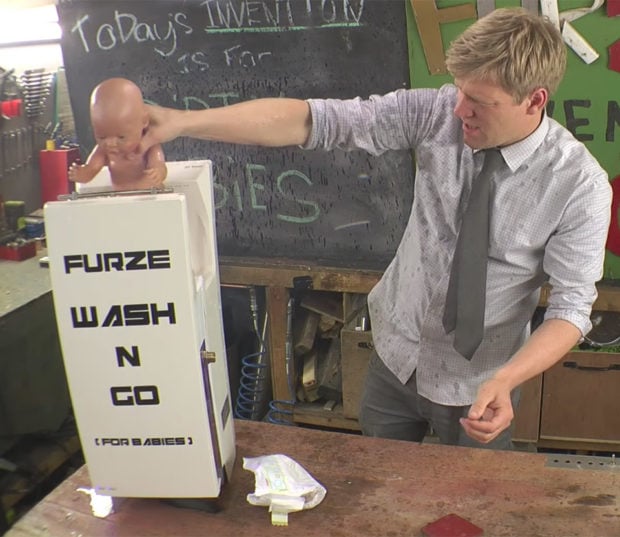 They also don’t tell you that baby poo smells like a turd’s turd and that a baby can literally shit out its own weight into a single diaper. If they told us this stuff ahead of time, no one would have kids, and humanity would go extinct. Fortunately, Colin Furze has invented something that all parents will want, it’s a dirty baby washing machine.

It doesn’t tumble the baby around or anything, it started life as a jet hand dryer, but with some major upgrades. It squirts water and blows the poo off without the need to touch stinky diapers. There’s one fatal flaw in Colin’s design though, because trust me, kids will pee as soon as that jet air comes on and it will go everywhere.

NERF Who? Go for the Beaver Blaster
Making Candy or Tugging on Satan’s Penis?
Trim Your Beard Neatly with the Beard Bib
The Archimedean Turd is Perfect Crap
Nosulus Rift Offers Virtual Flatulence First it was killer bees and now it's robo bees. At least the latter of the two are here to assist us. Find out how.

First it was killer bees and now it's robo bees. At least the latter of the two are here to assist us. Find out how. A new hoverbike prototype is grabbing attention for its ability to fly/float through the air. Resembling a cross between a motorcycle, a Jet Ski and a drone, you have to see it to believe it! (VIDEO)

A new hoverbike prototype is grabbing attention for its ability to fly/float through the air. Resembling a cross between a motorcycle, a Jet Ski and a drone, you have to see it to believe it! (VIDEO) A new super material that can be mass produced from inexpensive materials might just be the answer to solar alternatives.