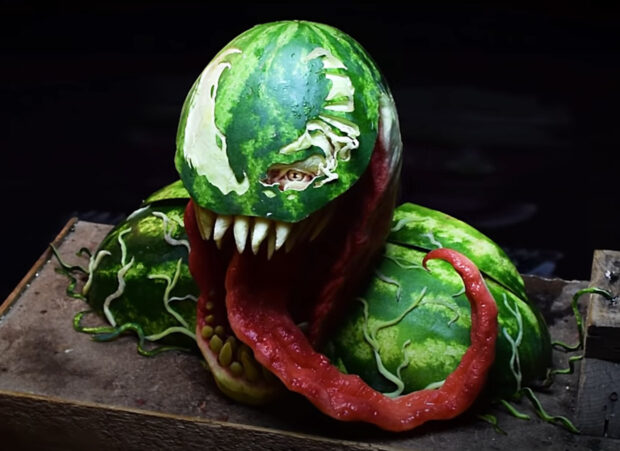 Who doesn’t look at a watermelon and instantly think Venom? It’s hard not to, right? Well instead of just thinking it, Italian sculptor Valeriano Fatica went and made our collective thoughts reality, carving Venom’s head out of a watermelon. I’ll be honest though, that does not look like a tongue I’d want in my ear. Or teeth I’d want nibbling my ear. As a matter of fact just stay away from my ears, Venom. 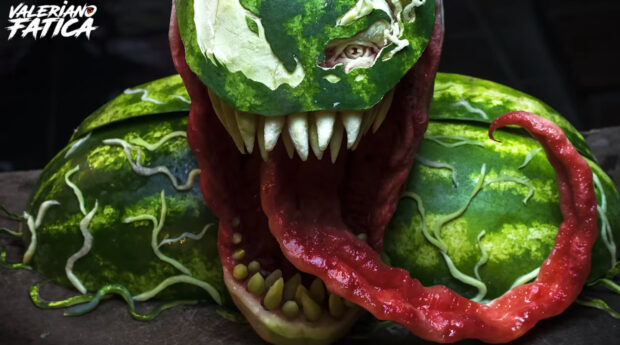 Valeriano says he works predominately in fruit and vegetables but also dabbles in cheese, clay, and rock. Out of those carvings, I would only eat the first three. Still, who knew you could carve such an impressive bust out of a melon? The only thing I’ve ever done with a watermelon is accidentally swallow a seed and get scared a plant was growing inside my stomach, which my parents said was probably the case. And they wonder why I have trust issues. 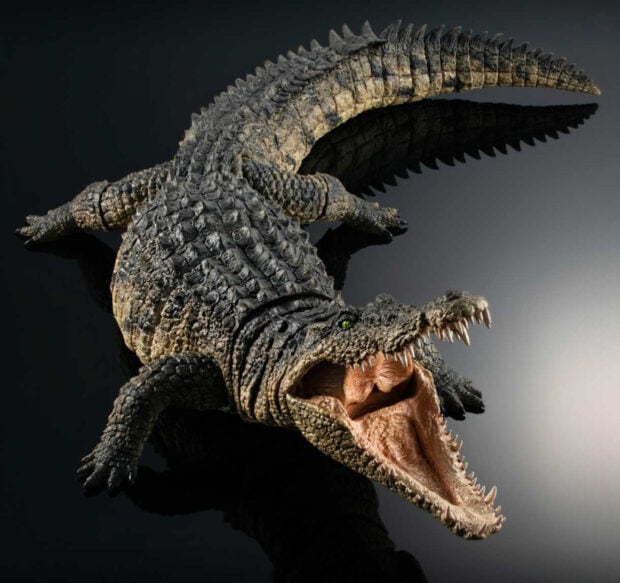 Crocodiles: you can easily tell them apart from alligators based on whether you’ll see them later or after a while. Plus alligators have broad, flat heads with only their top teeth visible when their mouths are closed, and crocodiles have pointed snouts with all teeth visible all the time. But to specifically celebrate the 16-foot freshwater Nile Crocodile, Bandai is releasing this 1/12 scale Ikimono Encyclopedia Ultimate Nile Crocodile model. 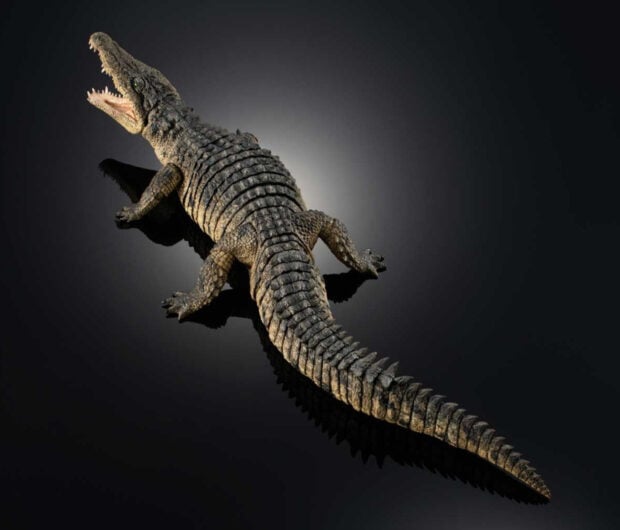 The 19,800-yen (~$180) fully assembled model features posable legs, an opening and closing mouth, and the entire body and tail are jointed vertically between each row of scales for ultimate articulation. It measures approximately 16″ long and I can already hear my wife screaming when she steps out of the shower and sees the scale crocodile model I placed on the bathmat. 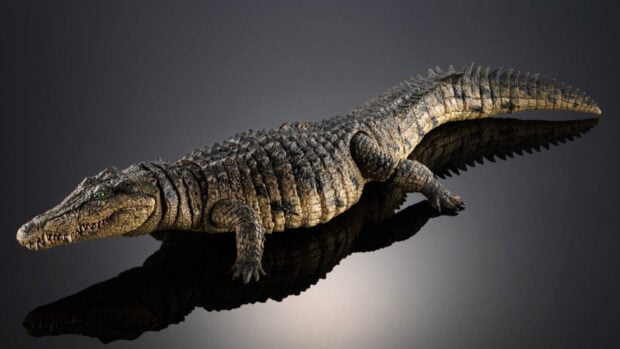 While $180 is typically out of my model price range, the thing I like most about this one is that it comes pre-assembled, meaning that while it does cost a fair bit more, I won’t just break all the plastic pieces and rage quit with a half-assembled model airplane glued to the kitchen counter. 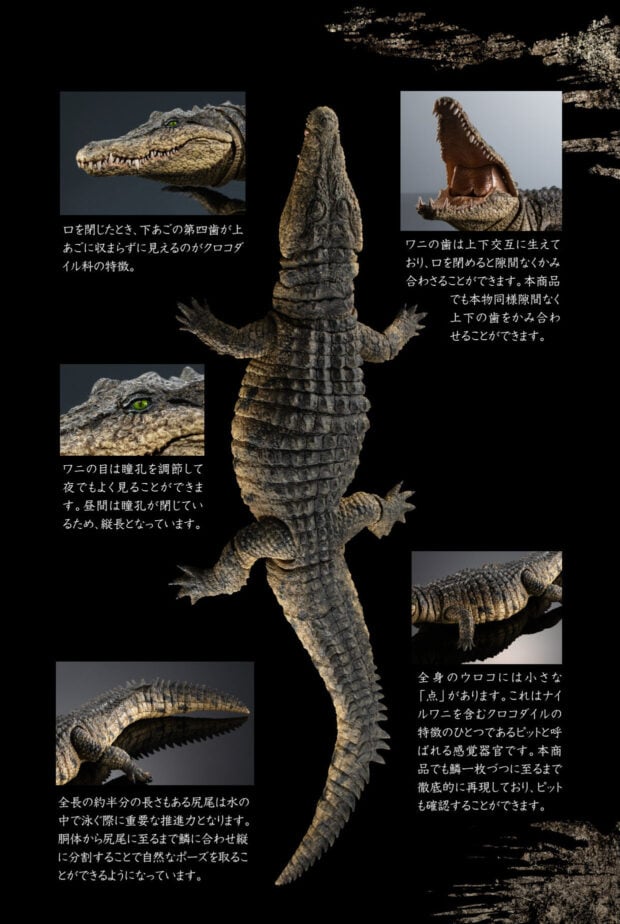 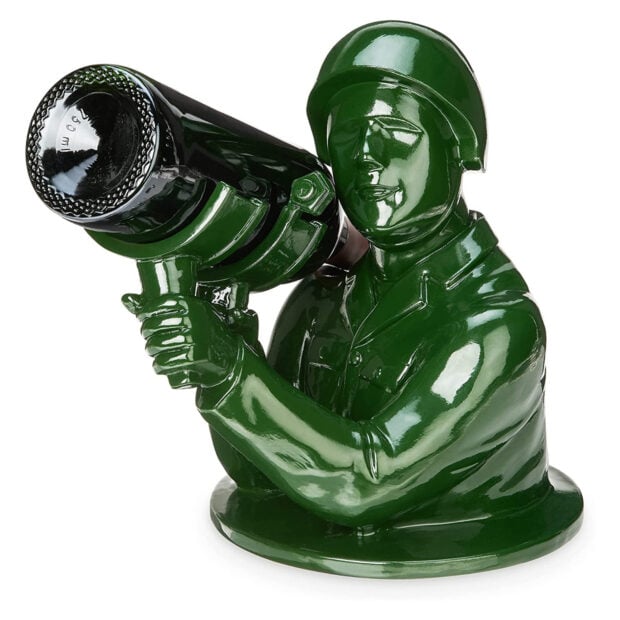 Because nothing says I think it’s time for a drink like being reminded you have children and their toys are spread all over the house just waiting to be stepped on, barware manufacturer Foster & Rye is selling this Army Man Bottle Holder (affiliate link), a wine bottle holder in the form of a green army man holding a bazooka. Fire in the hole! In this case, the fire being wine, and the hole being your mouth. 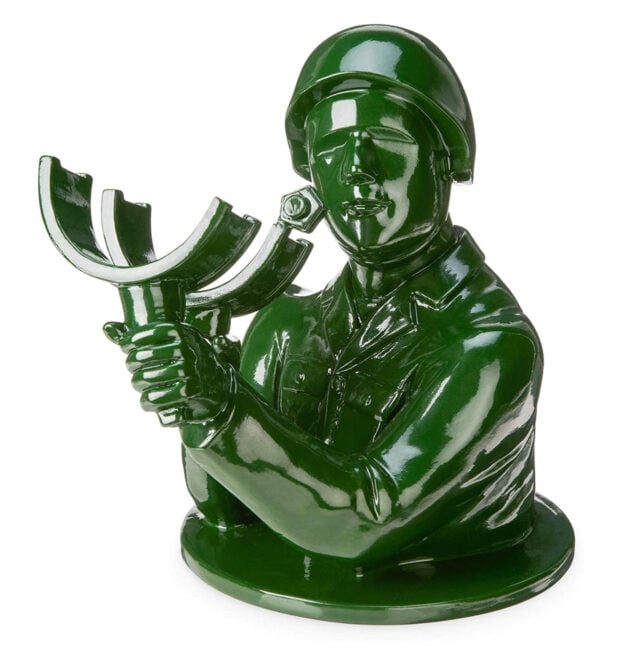 Cast from polyresin, the army man holds a single standard (750mL) wine bottle and looks good doing it. As good as I look holding a box of wine on one shoulder like a boombox? My wife is shaking her head no, which hurts. I want a whole platoon lined up in my wine cellar. And by wine cellar, I obviously mean crawlspace, which is where I already keep the more expensive bottles because all the spiders do a surprisingly good job of guarding them from my wife. 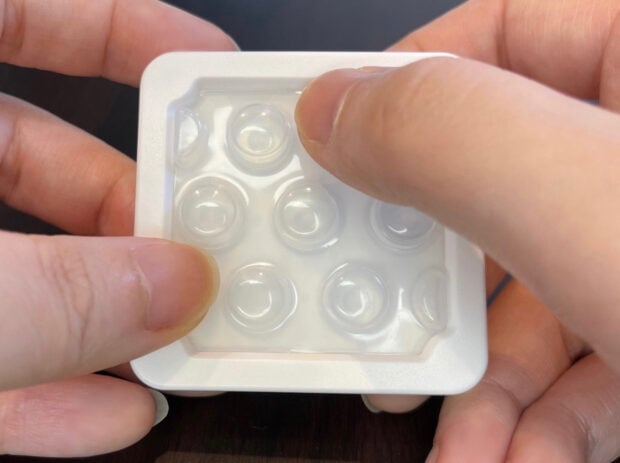 Stress: it’s a silent killer. Ninjas too. And what better way to relieve a little stress and anxiety than popping bubble wrap? Introducing the ∞ Bubble Wrap AIR from Bandai (affiliate link), an electronic device that mimics the popping of bubble wrap, with just the right amount of tactile pressure needed to press a bubble, resulting in a satisfying “POP” from the integrated speaker. You know, just ten times louder than regular bubble wrap. WHAT? I CAN’T HEAR YOU.

Not only is the device ten times louder than regular bubble wrap, but at random intervals, it also plays one of seven different sounds upon a successful bubble pop, including a cat meowing and baseball hit. That’s… weird. Of course, we’re talking about an electronic bubble wrap popper, so I guess normal flew out the window a long time ago. 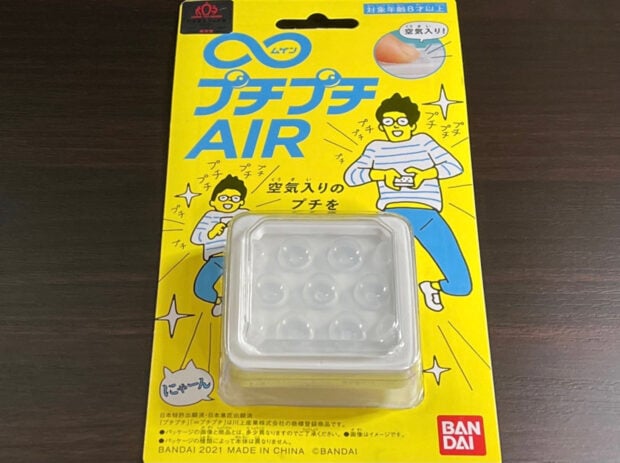 I’m seriously considering buying one. Because one time I was so stressed about work I popped an entire roll of bubble wrap before the employees at the UPS Store were finally able to push me out the door. Now, whenever I need to send a package I have to use FedEx. 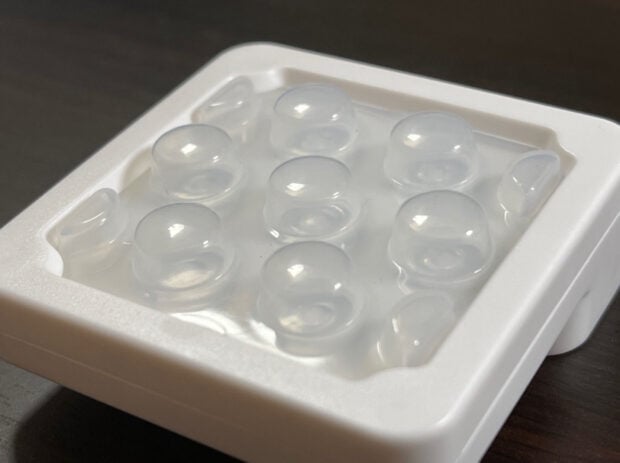 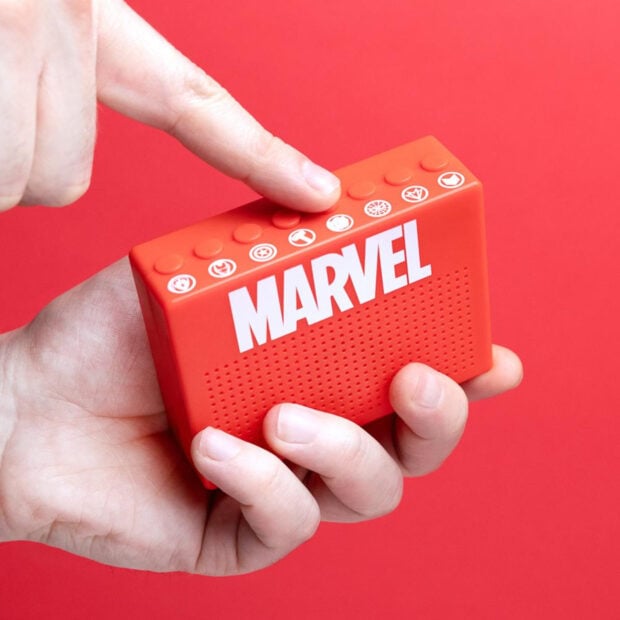 Just like Star Wars merchandise, there’s a market for every single sort of Marvel product you can think of. And to prove that point, this is the Marvel Sound Effects Machine. With the push of a button, you can play one of eight sound effects from Marvel superhero movies, and I’m pretty sure I just found the new soundtrack to my life. 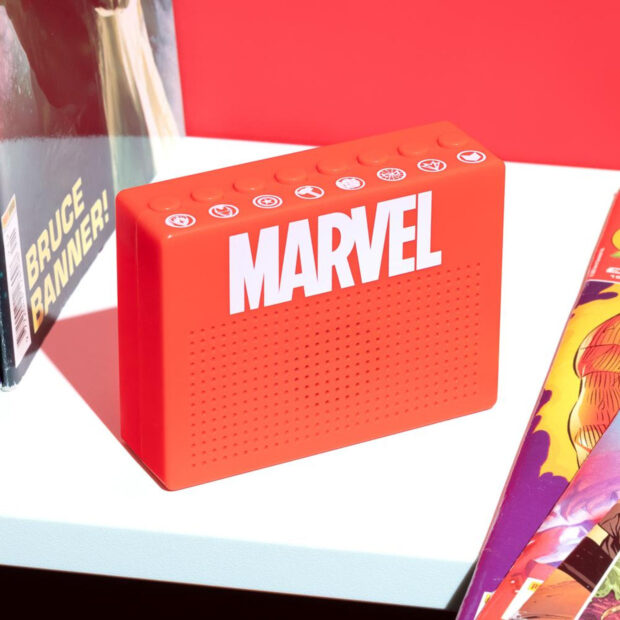 Obviously, I’m going to put one on my desk at work and only respond to coworkers with Marvel Sound Effects. And if I can’t answer a question with a Thor hammer blow or Hulk smash, well, I’m not answering it. 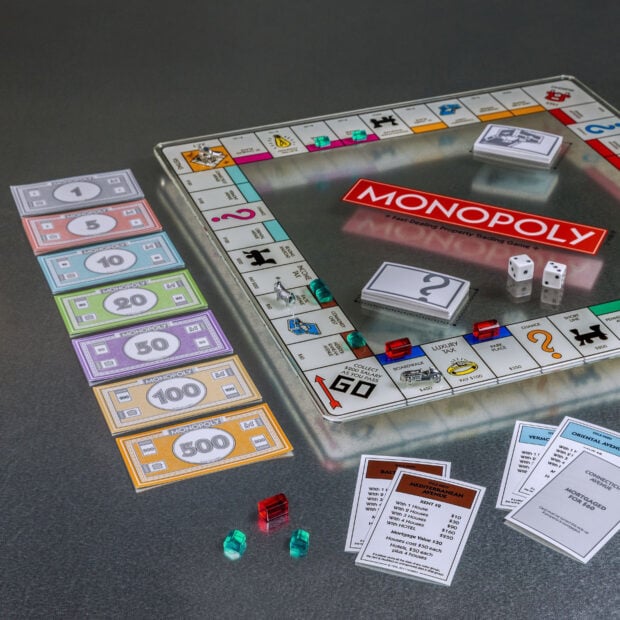 Every other edition of Monopoly exists, so why not one with a glass board? Monopoly Glass Edition from the WS Game Company features a 16″ x 16″ tempered glass game board along with diecast zinc game tokens and translucent houses and hotels. Fine, but I get to be banker, and I will be wildly misappropriating funds to my own benefit. 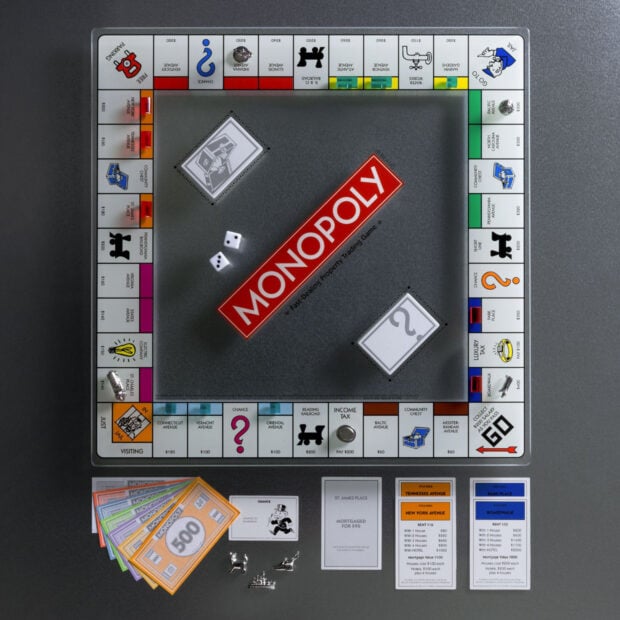 Glass is cool, but if they really wanted to get fancy, they should have made the board out of crystal. And all the game tokens and houses and hotels out of precious gemstones. I mean, what else are eccentric billionaires going to spend their money on – going to space for five minutes? 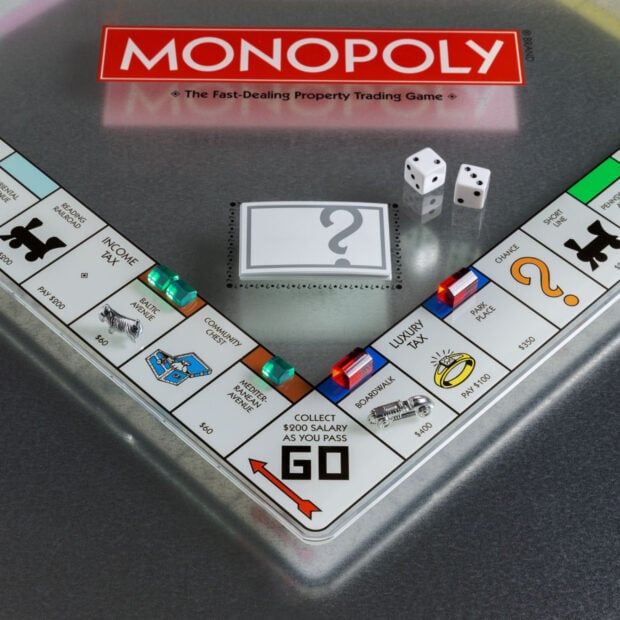 Of course, I imagine the real purpose of making a glass board is to add an extra element of surprise and danger when I flip the game after losing. Will I have to use one of my get-out-of-jail-free cards, so my wife doesn’t make me sleep on the sofa? You know there’s a reason I take them from every Monopoly game I come across. 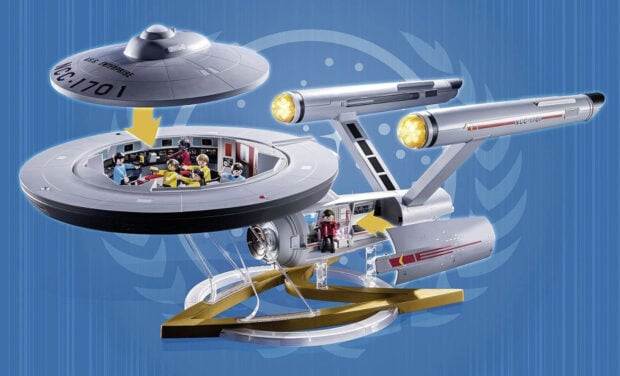 Hot on the heels of their successful Back to the Future DeLorean and Marty McFly’s truck playsets, Playmobil is releasing another set aimed at adults with this giant Star Trek: The Original Series USS Enterprise NCC-1701. I’ve already added it to both my birthday and Christmas lists. 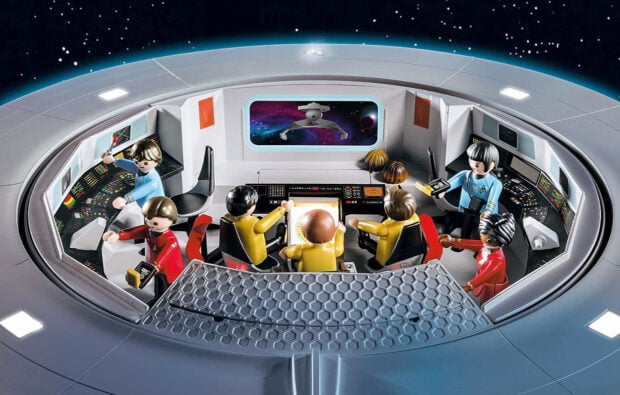 The 148-piece USS Enterprise measures 39-inches long and features numerous light and sound effects, as well as dialog from the original show. Playable areas include the ship’s bridge (with a place to put your smartphone in landscape mode to act as the bridge’s monitor, seen above) and engineering room (with dilithium core that powers the ship on and sounds an alarm when removed, seen below). 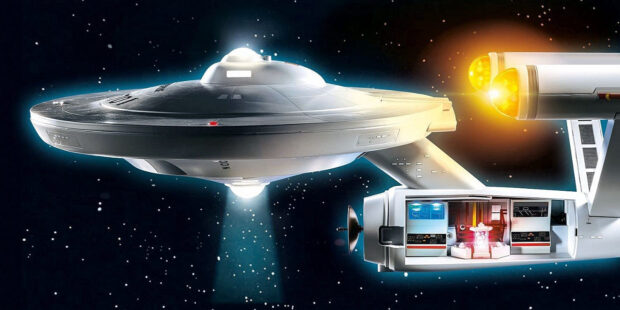 The set includes seven figures (Captain Kirk, Spock, Lt. Uhura, Doctor McCoy, Hikaru Sulu, Scotty, and Chekov), some tribbles, phasers, and other accessories as well as hardware to hang the ship, and a display stand. It will be available on September 21st with a retail price of $500. That’s a lot of space bucks!

I was just about ready for Scotty to beam me up until I heard the price. I can’t even remember the last time I spent $500 on a toy and got away with it, but you can rest assured it’s only because my wife hasn’t found out about it yet. 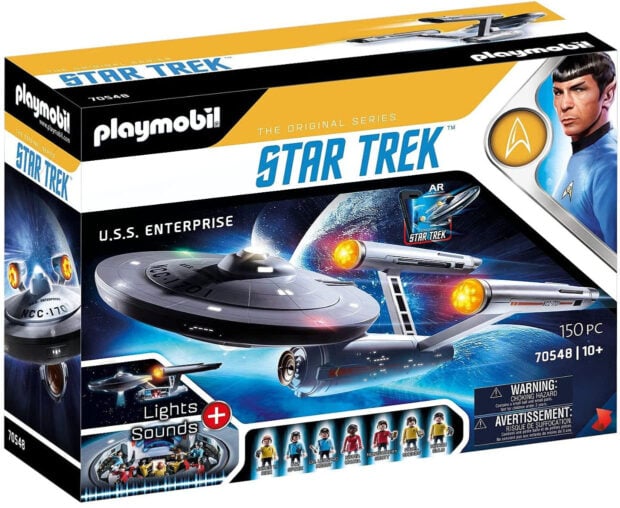 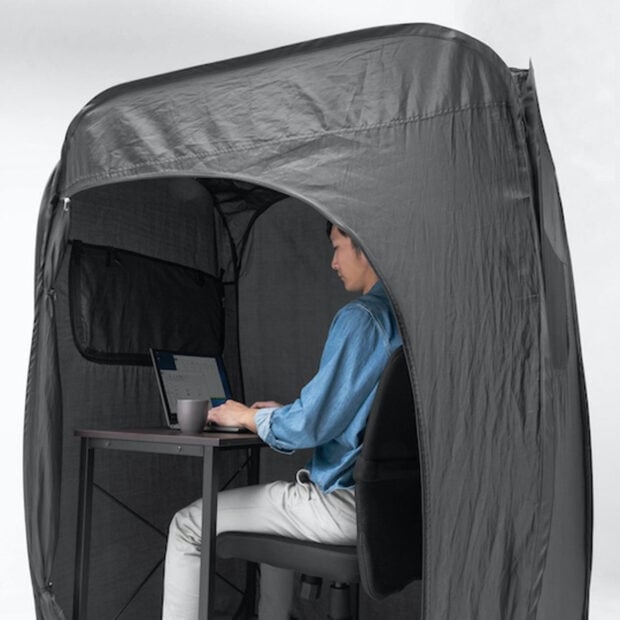 With an increased number of employees working from home in spaces they may not have anticipated being their new office, what’s a person to do to ensure some privacy so they can focus and get their work done uninterrupted? Personally I lock myself in the bathroom. Alternatively, there’s the $120 Sanwa Home Privacy Tent available from the Japan Trend Shop. 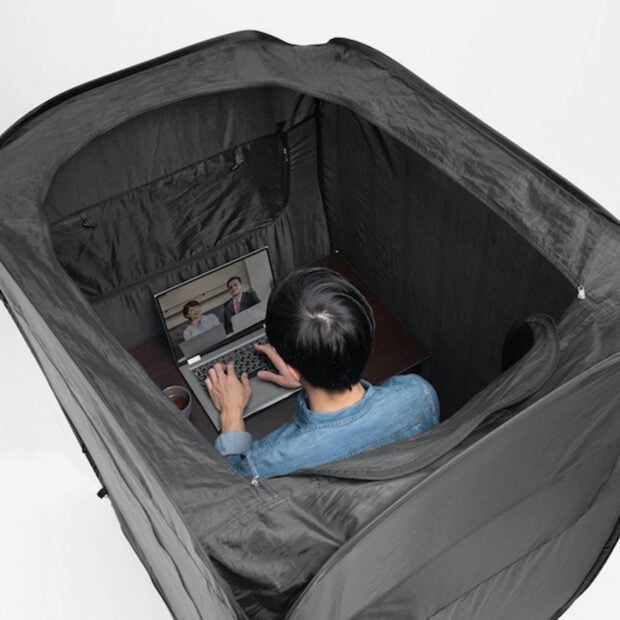 Just like a fun sports car, the Home Privacy Tent includes a sunroof. It also features a side window, measures 35″ x 43″ x 59″, and folds up easily for transport in its included carrying case. It’s perfect for telecommuting, gaming, studying, use as a small photography studio, and more. Still, it’s not exactly what I had in mind when I imagined myself with a home office. 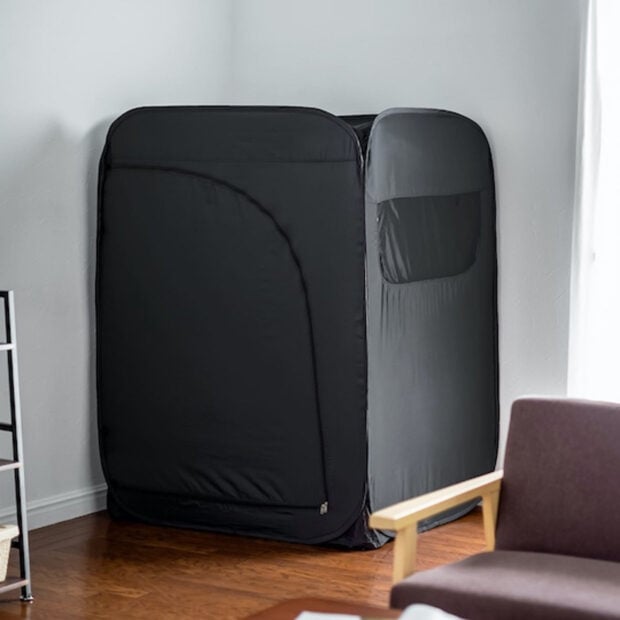 So, is a Home Privacy Tent going to be my new Fortress of Solitude? Given that my wife removed the lock from the bathroom door, I’m afraid I don’t have many other options. Are my cats going to constantly try to lay siege to the tent whenever I’m inside? I wouldn’t be the least bit surprised to learn they’ve already built a catapult. 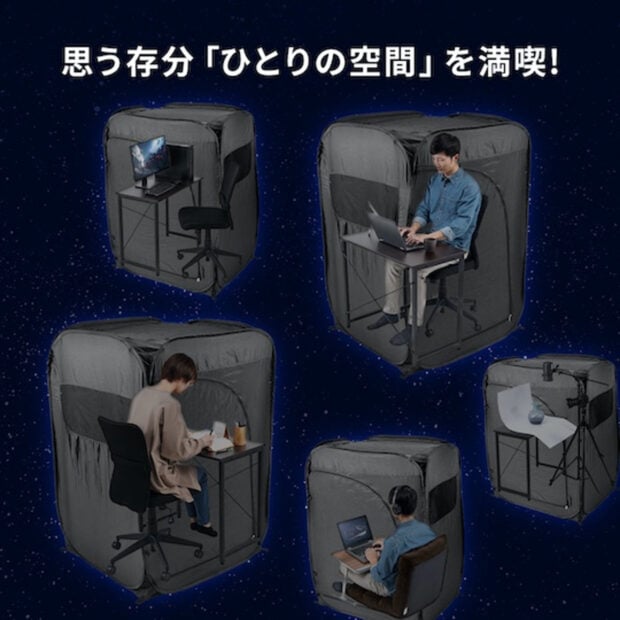 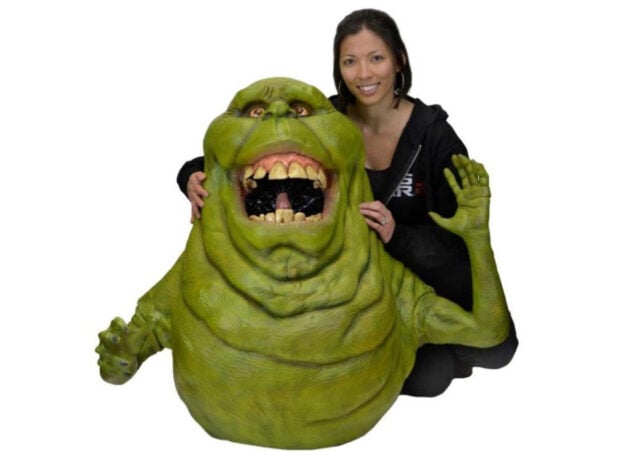 Created from the same molds as the prop for the original 1984 Ghostbusters movie, this is the life-size foam rubber and latex Slimer replica from NECA (the National Entertainment Collectibles Association – an awfully official-sounding name for a collectibles manufacturer). Obviously, he will be the focal point of all my Halloween decorations this year, and every year from now on. 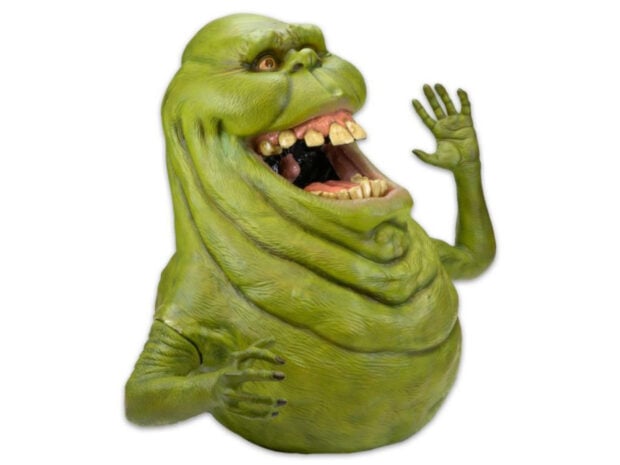 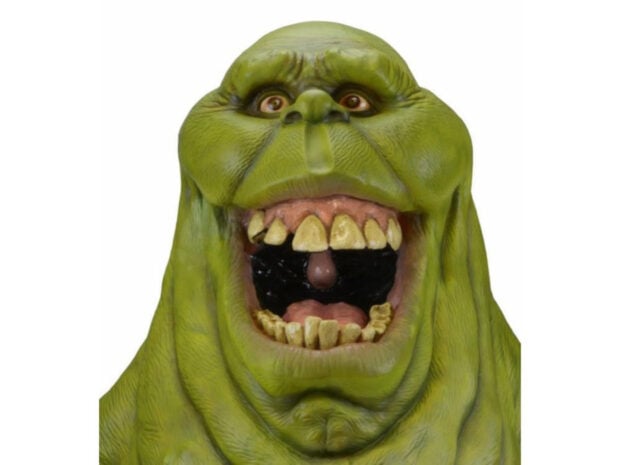 Do you know what would be even cooler than a replica of Slimer from the original Ghostbusters? A replica of the librarian ghost from the very beginning of the movie. And by cooler, I meant more terrifying. You know she’s the reason when I wake up in the middle of the night and have to go to the bathroom I convince myself to just hold it until morning instead. 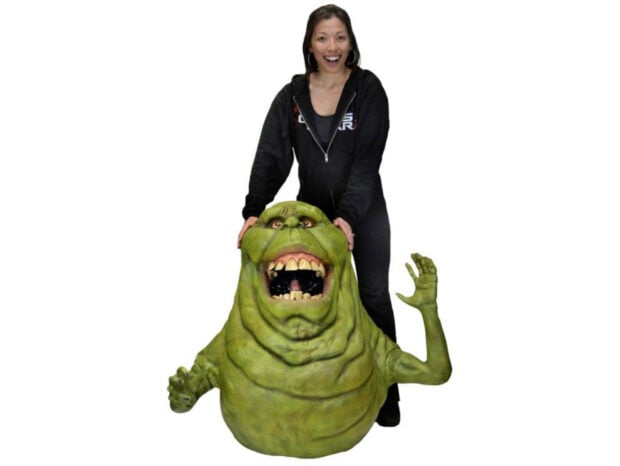 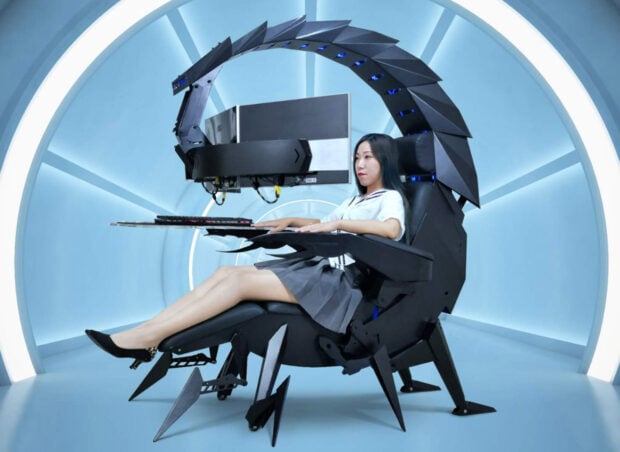 Scorpions: they can be deadly. And this chair looks like it could be too. Introducing the IW-SK ‘Cool Scorpion’ reclining computer workstation from Cluvens Cockpits. It’s a PC rig that looks like a giant steel scorpion and reclines so you can relax at maximum levels while becoming fully immersed in your computing experience. Or losing at Call of Duty and rage-quitting like I will be.

The IW-SK costs $3,699 and includes free shipping in the continental United States. It takes an hour or two to assemble, weighs 352-pounds, and features a push-button control to lower up to three monitors (not included) in front of you. It also includes electronic control of its recline function to 128-degrees (aka “zero gravity”), all the way down to 170-degrees. Most importantly, it features cup holders in its armrests. 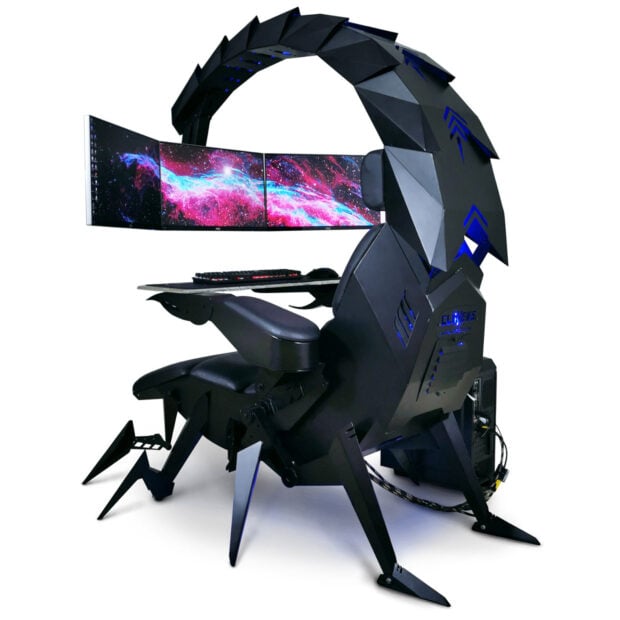 As much as I do want one (and I want one badly), I’m not sure I’d even be able to fit an IW-SK in my office without tearing down a wall. Then tearing down another wall. Then another and another until I’m just outside praying there isn’t a thunderstorm coming.